Hello Borinqueñas! Usually when we talk about scientific models we think of people whose have become role models through their contributions in the area of science. But today I introduce you to Borinqueña, Alexandra Wiscovitch, a scientist and professional model who proves that scientists can do More than Science!

Kimberly: Alexandra, tell us a little of your personal and academic backgrounds.

Alexandra: I am from the town of Hormigueros in Puerto Rico and studied at the “Academia Bautista Fundamental de Mayagüez”, a bilingual academy that has an individualized education system that allowed me to enter the UPR-Mayagüez at the age of 16. I am currently finishing my bachelor degree in Industrial Microbiology.

Kimberly: What motivated you to study science?

Alexandra: Ever since childhood my favorite subject matter was always science. No one in my family has a scientific career, so my only contact with this discipline was at school. When applying to college I chose to study industrial microbiology. Like many students who enter any branch of biology, at first my dream was to be a doctor, because I liked the idea of having contact with people and helping others. In my early days in college, I had no idea that scientific research could be a career.

Kimberly: If you didn't know that scientific research could be a professional career, Then, how did you become a scientist?

Alexandra:It was not until my sophomore year in college, when I took a class in genetics with Dr. Taras Oleksyk that I started to consider science as a career. Attending his class was the most exciting moment of the day! I still remember sitting in the first row and never getting distracted because the class was fascinating. After this experience, my plans changed completely. I realized that genetics was one of my passions. I made the approach to Dr. Oleksyk to work in his research laboratory. Three years later, I think has been the best decision I ever made in my life, as it has been incredibly fun and rewarding.

Kimberly: Now that you already work as a scientist in the area of genetics, what are some of the most remarkable experiences and achievements that you have had?

Alexandra:One of my major achievements in science was the opportunity to integrate both of my passions, science and modeling, for a beautiful fundraising event conducted by Dr. Taras Oleksyk and myself in order to raise money to carry out the Puerto Rican Parrot Genome Project. In this activity the scientific community joined to the world of fashion in a runway show with collections inspired by the puerto rican parrot. Several artists, designers, and models collaborated in the effort. For example, Dr. Greetchen Díaz, a scientist and accessories designer contributed some of her jewelery. In addition, I had the opportunity to do summer research at the Massachusetts Institute of Technology (MIT). It was a wonderful experience that strengthened my interest in research.

Kimberly: Speaking of your work as a model, what motivated this other interest and when did it start? 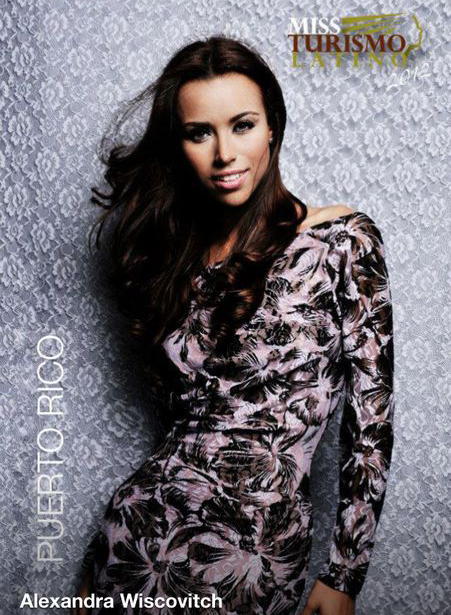 Alexandra: I've been modeling since I was 10 years old. When I was a kid, I was overweight. Around that time, a new modeling academy opened in Hormigueros and my mom decided to enroll me in the basic course. In just one year, I lost I gained an incredible amount of confidence in myself! Then, when I was 16 I entered the modeling agency Annjannette. In 2009, I was the first runner in the Splendor Model 2010 contest, that’s when my modeling career started. Since then, I have had the opportunity to work in advertising, runways and magazines as well as being co-host of a TV show that was about tourism in the western area of Puerto Rico.

Kimberly: You were a beauty queen, how was that experience?

Alexandra:One of my dreams was to represent my country during my modeling career and I had the opportunity to be Miss Turismo Latino Puerto Rico 2012. I participated in the international competition in Guayaquil, Ecuador. It was a magical moment and this opportunity not only helped me grow as a person but also allowed me to meet wonderful people and beautiful places.

Kimberly: What has been the most meaningful experience as a model that has inspired you to continue in this career in addition to doing science?

Alexandra: My greatest satisfaction is to teach modeling and refinement. Believe it or not, modeling is a tool that can be incorporated into all aspects of life. Observing the evolution of my girls on the runway, in front of the camera, in their diction, and in their self-confidence are the most rewarding experiences for me. I feel very proud every time I see them in magazines or on TV! Besides, being able to integrate my two passions during the fashion show for the parrot was very gratifying.

Kimberly: How do you combine these two careers, which are both very demanding?

Alexandra:  It has not been easy to integrate both careers because each demands a lot of time. But thanks to the support of my family, my mentor, my agency and my promoter I am able to fulfill all of my commitments. Modeling has also helped me to express myself in public and feel more confident in speaking to the scientific community.

Kimberly: Now that you have demonstrated that you can be a scientist and professional model, what are your career goals? Do you want to further integrate both careers?

Alexandra: I would love to keep doing both aspects. Right now, I'm focused on my applications to graduate school because my plan is to do a Ph.D. in genetics. My goal is to work with translational research and personalized medicine because I want my contributions in science to help people have a better quality of life.

Kimberly: What advice would you give to the Borinqueñas scientists that like you want to combine more than one passion?

Alexandra: My biggest advice is to never give up. There will always be situations and missteps along the way that will make them think they can not accomplish their goals but you need to keep trying and always stay positive. With hope and effort you will accomplish your goals!

If you want to know more about Alexandra, visit her profile at CienciaPR. You can follow Kimberly Cabán on Twitter @KimCaban.

WHAT IS COVID-19 AND WHY HAS IT RECEIVED SO MUCH ATTENTION?
END_OF_DOCUMENT_TOKEN_TO_BE_REPLACED