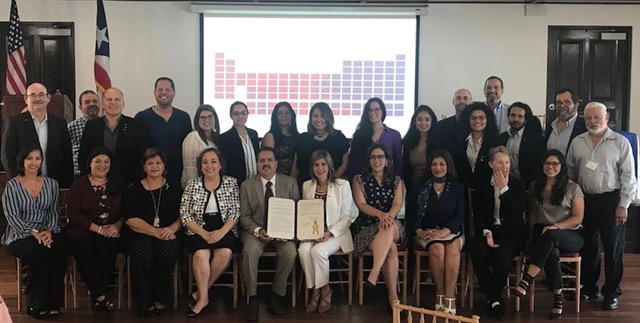 On January 30 and 31 of 2019 the American Chemical Society, Puerto Rico Chapter (ACS-PR) held its first science advocacy workshop in the Capitol building of the Puerto Rico legislature. Approximately 30 scientists and students participated in this event, meant to help the chemistry community in Puerto Rico be more effective science advocates.

The first day consisted of a presentation given by Dr. Allison Campbell (2017 ACS President) and Karen García (Senior Legislative Associate, American Chemical Society) followed by a group activity. The presentation focused on how to talk to your elected officials.

Some of the key points discussed in the presentation were:

One lesson learned, was that often, it is most useful to meet with representatives who are against or undecided on the topic you are advocating for, since these are the people who could potentially change legislative outcomes. For this reason, make sure to research the background of the representatives you will be meeting with and try to find common ground in advance, in order to establish a connection that can help you convince the representative to support your cause.

This was a great opportunity to realize that as scientists, we need to be flexible on what to expect from these meetings. The representatives and their staff have busy schedules. Often, meetings might be held while walking between offices hence the constituents who are pitching an issue have to adapt. It is also extremely important to have talking points prepared, share relevant statistics that demonstrate an impact to the constituents and be well versed in the subject matter under discussion.

The second day started with a panel conversation on the importance of science education and research for the future development of Puerto Rico.  The first panelist was Dr. Jorge Colón Chemistry professor at the University of Puerto Rico, Rio Piedras and member of ACS, who proposed that our greatest challenge as scientists today is to convince the government that funding and investing in science is essential despite the ongoing economic crisis. He suggested that one way to work toward sustainability is by transitioning to cleaner and cheaper energy. The second panelist was Jorge Valentine from  the Puerto Rico Science Technology & Research Trust (PRSTRT). His talk focused on funding challenges at the preschool and elementary school levels, emphasizing that this sector of the population has the greatest imagination and curious minds full of potential. He argued that one of the biggest challenges in Puerto Rico was finding funding opportunities to develop laboratories in K-12 schools, and proposed  informal science education opportunities as a solution. He suggested the creation of partnerships between the Department of Education and non-profit organizations or professional societies, such as ACS, to expose children to these hands-on experiences throughout their development. Furthermore, he explained that these efforts are aligned with the White House Plan for STEM Education.

This was followed by a presentation from Dr. Gretchen Díaz, Director of STEM Education Programs at CienciaPR who spoke about the importance of building bridges between scientists and the public. A key aspect of this goal is offering training for scientists to master public speaking skills so they can make science understandable and accessible to all. Dr. Diaz argued that Puerto Rico possesses amazing infrastructure to further develop scientific enterprises and that the challenge is to use these facilities to their full capacity. She also discussed the need for Puerto Rico to prepare its workforce for the demands of the current economic landscape. Another talking point for this panelist was the need to return to the basics of scientific training, specifically developing critical thinking skills at the K-12 level. Similar to Mr. Valentine, she talked about connecting teachers with scientists arguing that the challenge was to find a way to incentivize scientists to collaborate with teachers in order to build lasting partnerships. Dr. Luz Silva spoke next as President Elect of the Puerto Rico Chemists College. She emphasized the need to maintain a mandatory professional association for chemists in Puerto Rico and the challenges that the exodus of professionals presents to the chemical industry in Puerto Rico. The final panelist, was Dr. Juan Ramírez, UPR Rio Piedras Biology professor and President of the AAAS-Caribbean Division. He talked about the importance of recognizing the work of teachers in promoting excellence in the sciences, on increasing scientist involvement in science policy and in reaching out to the public.

Following the panel, the former governor of Puerto Rico, Hon. Anibal Acevedo Vilá, spoke about the importance of investing in Puerto Rico as a hub for research and science. He listed strong STEM enterprises in Puerto Rico, such as aerospace, pharmaceuticals and academia. He also highlighted the excellent training and education that Puerto Rican scientists receive. Finally, he talked about the importance of the PR Science Trust leading the development of the “Science City” complex as a driver for scientific enterprise in our archipelago.

The closing activities included the proclamation of the celebration of the International Year of the Periodic Table, read by Senator José Luis Dalmau and handed to Dr. Ingrid Montes (member of the ACS board of directors). The event culminated with a narrated tour of the history of the Puerto Rico Capitol Building.

We are excited to announce that this event opened the door for future collaborations between ACS, Puerto Rico Chapter and PR-SPAN, and we are looking forward to working together to improve science policy advocacy in Puerto Rico.

WHAT IS COVID-19 AND WHY HAS IT RECEIVED SO MUCH ATTENTION?
END_OF_DOCUMENT_TOKEN_TO_BE_REPLACED