Whoever hears the student Hericka Loraine Cruz Luciano, would believe that she is describing her favorite movie, a play, or a famous novel, where emotions flow from the deepest sadness to the most euphoric joy with the speed of a thought.

She was, in fact, referring to her experience as a scientific researcher. The student is in the 12th grade at the Josefa Vélez Bauzá High School in the town of Peñuelas, where she has developed a multi-year project that has led her to conquer scientific skills in Puerto Rico and abroad.

According to Hericka, her wave energy project began in the 9th grade, thanks to the motivation of her mother, Profa. Lilybeth Luciano Candelario. Lilybeth noticed in Hericka scientific curiosity and an ability to express herself and communicate, and suggested that she participate in the school's scientific fair.

At first, the student saw the "huge poster boards" of the science fair projects as something that was going to give her a lot of work and as something that she did not feel capable of doing. The support of her mother and the collaboration of her teachers, Vicmaris Lugo (chemistry) and Víctor Galarza (physics), both of the Josefa Vélez Bauzá High School, finally convinced Hericka to enter the scientific fair.

The selection of the project consisted of reviewing an extensive list of topics and seeing which one caught her attention. At the same time, she followed his mother's advice, which emphasized that the topic should be good, competitive and innovative, as well as unique, feasible, cost-effective and relevant to the student's community.

Among the countless topics, suddenly, the word "undimotor" appears to Hericka and she reacts surprised. "What does it mean? I did not know what undimotor was. If I reacted like that to that word, imagine how those who I presented the project to would react to it."

It was Prof. Galarza who taught the young woman about the meaning of the word--a device that generates energy based on the movement of waves--and how to get more information. Prof. Galarza recalls, "She finds me and asks me about undimotor energy. I already knew the term because a teacher should always be up to date, constantly researching and looking for new ideas that will draw the attention of the student. One brings new things to the classroom to develop students who are thinkers and entrepreneurs."

At the same time, Prof. Galarza identified several reasons that could make the project a successful one. "First of all, I liked the idea, since it integrated different disciplines at the same time, similar to the STEM concept (Science, Technology, Engineering and Mathematics). Another reason was that the project allowed us to maximize the natural resources in Puerto Rico that we have not been able to efficiently operate. As a society, we are wrong if we can not extract energy from renewable resources, such as waves, wind and solar energy, or lower the costs of energy production. My generation did not do it, maybe Hericka's generation can do it. " 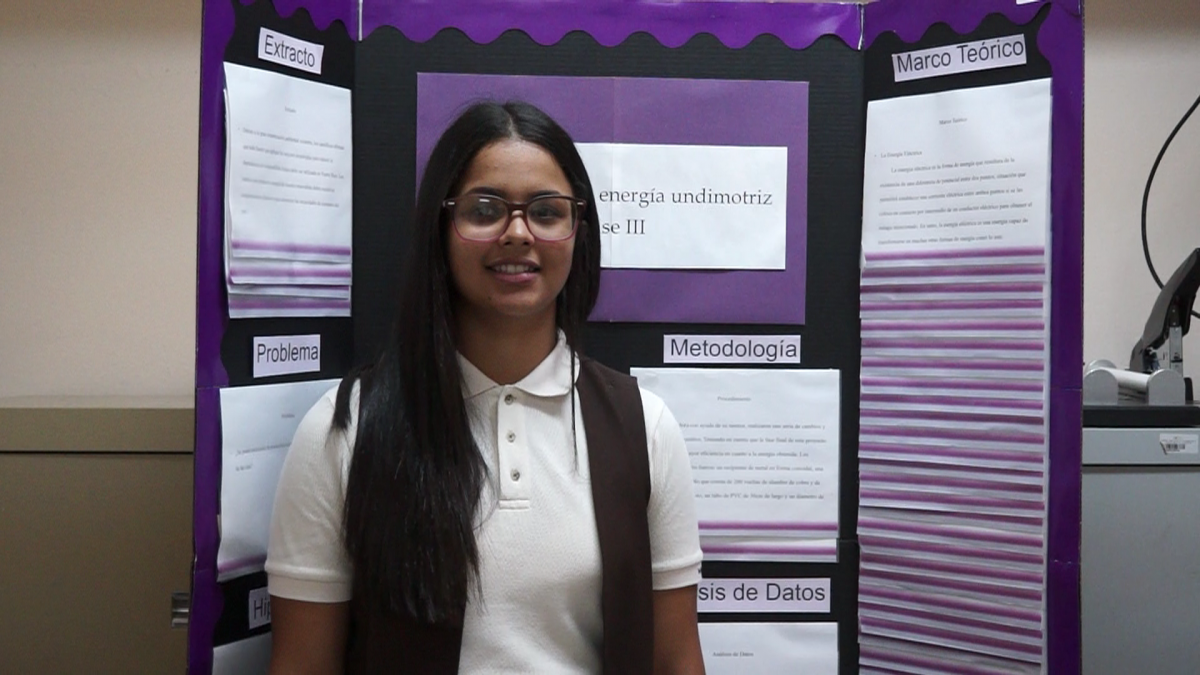 One of the first steps was to investigate similar wave motors that already existed or had been described in scientific articles. The young researcher was surprised by the size of some of those machines. "Countries like Japan and Britain have pilot projects to extract energy from waves and studies that describe this type of technology. When I read about those huge machines, I told my mentors that we could not build something like that, it was very big and expensive. "

The teachers explained to Hericka the difference between those ideas and something that could be built locally. "In the literature review, we found systems designed to work in oceans with high waves. In the ocean, the waves have much more energy and are harder to extract. You can even destroy the machines! In addition, the already established systems are not near the coast, which entails a higher cost and greater personal risk," one of the mentors described.

Hericka told us that her concept then changed to "one based on the sea, where the swell is not so high. They are "silly waves", but more constant. It's those waves that you have to take advantage of."

Her wave energy project, entitled "Evolution of the Undimotor Energy", consisted of three phases, one for each academic year. The first phase was completed in her middle school, Second Unit Macaná, and consisted of building a device that could move, as the wave passed, without getting stuck. By doing so, she found that it was possible to convert the oscillatory energy of the waves into mechanical energy to raise and lower her device.

That description sounds as if everything went without a hitch, but the reality was another. "The first device was a very rustic model, with a type of wheel, a small mechanism, and an anchoring system that was not the best."

Hericka did first test during a family vacation in Rincón. In a previous conversation, Prof. Galarza had warned her about the high swells in that area and that she should be careful. Even so, packing her bags, Hericka saw the device and decided to take it with her. What was the result?

"With the first wave the mechanism did not move, with the second wave it moved a little bit and the third wave destroyed it completely. Some parts floated and others remained in the sand. It was a total disaster. I did not know with what face I was going to face my mentors. I came to school crying, telling them that the model did not work and, worse, it had broken. "

After this terrible experience, the young woman thought she was not ready to do this type of project. Her teachers told her to be calm, that this was the first of many times where the experiments would not go as expected, and that she had to take things slowly. "Science is like that and experimentation too. You have to be perseverant, keep trying, keep modifying until you achieve your goal, "said Prof. Galarza.

From that moment, Hericka decided to write down everything about how each of the devices worked as they were tested at sea. It is from her notes that ideas emerged for her to focus on the purpose of the project, how to modify it and identify what was needed to make it work better. At the same time, she sought the advice of some friends of her father, Mr. Melvin Pacheco Muñiz, who were mechanical and electrical engineers, as well as professors at the Mayagüez campus of the UPR. This is how the second and third phases of the project were prepared.

In Phase 2, she used the concept of electromagnetism and captured the mechanical energy of the wave and changed it to electric power to light an LED bulb, while the device went up and down. "That process took a while, since the LED did not turn on the first time. When I finally turned on the light bulb, I had a doubt because it was done very quickly, I did not know if I was seeing something real or if it was my imagination. Then I noticed a part that was skimming and did not allow the device to move correctly. After making some modifications, it did work!"

In the most recent phase of her project (Phase 3), the girl managed to enlarge the size of the device to make it more resistant to waves, modify the electric conversion chamber using neodymium magnets and copper cables, and protect its systems so that salt water did not enter and corrode the device.

Hericka's efforts and her wave energy project led her to receive first place at the Regional Scientific Fair of Puerto Rico in 2016, 2017, 2018, at the International Forum of Young Scientists for Puerto Rico in 2017, and at the Grand Prix of the Inter-American Association of Sanitary Engineering and Environmental Sciences (AIDIS) in 2018. In addition, she participated in two international scientific competitions, one in Colombia (International Science, Technology and Innovation Fair 2017, in Valledupar) and one in Mexico (VI Science Cup 2018).

The success of the young woman in scientific fairs awakened in her the desire to explore the field of engineering as a possible career. "I have visited universities and expos, orienting myself on university life. I have read about the University of Puerto Rico, the University of Turabo and the University of the Sacred Heart. I would like to study mechanical engineering or software engineering at the Mayagüez Campus of the UPR, something that has to do with my research project or with technology."

The achievements and recognitions are something very rewarding for this young student, but while she is happy with these memories, the project reminds her too much of her mother. Unfortunately, Prof. Lilybeth Luciano Candelario, who motivated Hericka and introduced her to her mentor teachers, died in 2016 due to cancer, only months after the project began.

The student appreciated the mentoring of her teachers and their families, indicating that support is crucial for students, like her, who participate in competitions and extracurricular activities. "My mentor teachers were a key element for me to evolve as a student and researcher and take the work to a higher level." That impression is shared by Prof. Miguel Rodríguez García and Prof. Wilmarí Ayala, directors of the Josefa Vélez Bauzá High School, since the school stands out for supporting those students who participate in scientific, sports and musical competitions.

Reflecting on her three years of experience as a researcher, Hericka described the process of doing science in the following way: "Scientific research is more than sitting down to read or analyze data, it's something that becomes part of your life, it's something that is going to stay in your mind and in your heart. At the same time, it is a memory of my mother since we were very close and she was the one who encouraged me to do a scientific fair project".

Enrique Vargas is the director of JYE Studio, an independent digital media company focused on the production of audiovisual materials that incorporate scientific concepts. Wilson González Espada is Professor in Physics and Science Education at Morehead State University. Both are members of Ciencia Puerto Rico (www.cienciapr.org).

WHAT IS COVID-19 AND WHY HAS IT RECEIVED SO MUCH ATTENTION?
END_OF_DOCUMENT_TOKEN_TO_BE_REPLACED