Corals have an extraordinary ecological role. They serve as the main habitat for thousands of species and are the base of the coastal food web. Corals also protect from coastal erosion, to mitigate greenhouse gases and global warming, to boost the fishing industry, and to serve as places for tourism and recreation. However, in the last decades, many corals have been dying. The attackers are many: turbidity, sedimentation, fecal contamination, climate change and even military bombs.

For more than two decades, Dr. Edwin A. Hernández Delgado has researched corals and other marine organisms, documented their condition, proposed conservation alternatives, and educated future generations of marine biologists. One of his most recent studies, in which he described the slow recovery of corals bombarded near Culebra and Vieques, was highlighted in Diálogo, the University of Puerto Rico’s newspaper.

Dr. Hernández Delgado spent his school years in Juncos, Puerto Rico. His interest in science emerged mainly from the influence of his mother, “Mrs. [Sonia] Delgado”, who worked as a science teacher at Fulgencio Piñero Middle School. Other teachers who inspired his science interests included Víctor Flores y Elena Pérez. 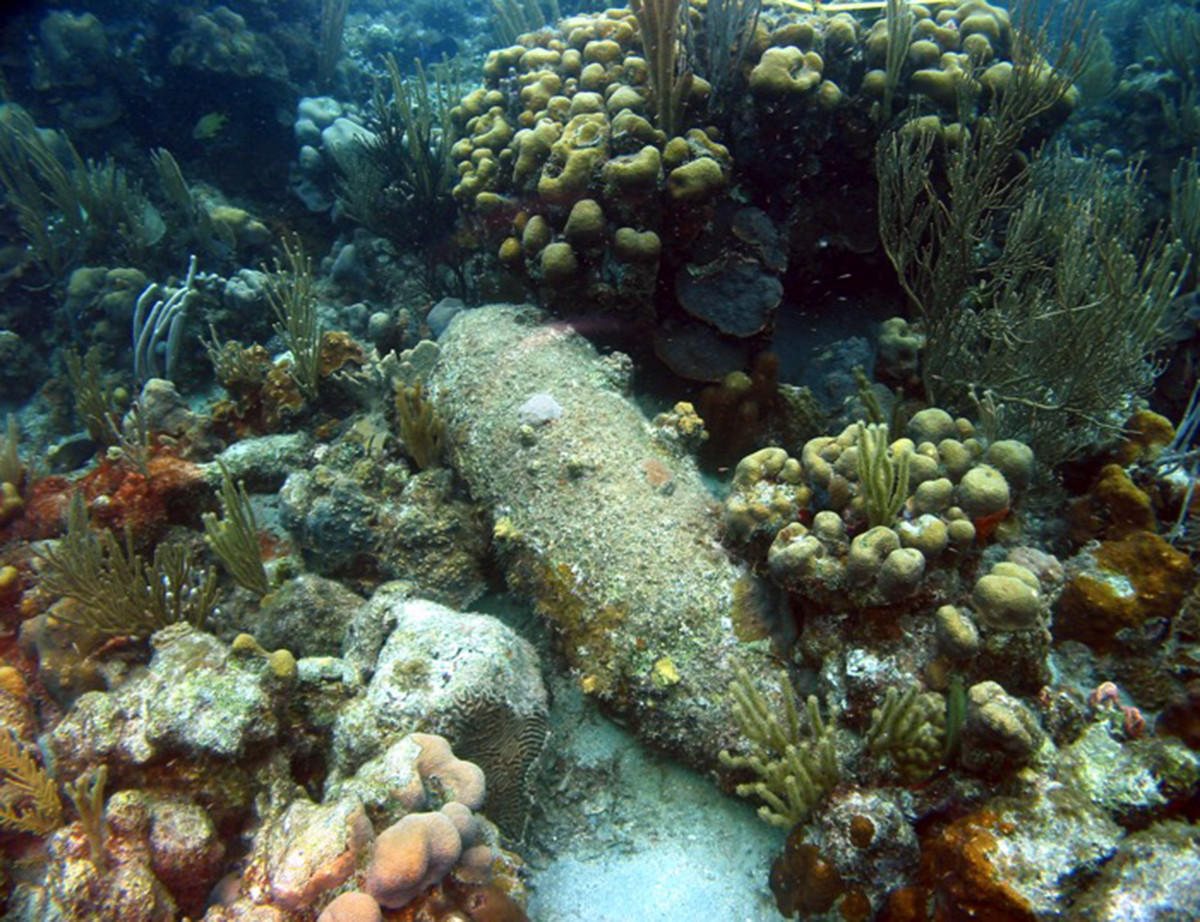 In 1982, Edwin was accepted at University of Puerto Rico at Humacao, where he completed a bachelors degree in marine biology. Being a college freshman at age 16 almost caused him to drop out of college. “Maybe starting college so young and immature came at a cost. I started my academic career on bad footing: I flunked a biology class, lost my scholarship, and finished the semester with a 1.29 grade point average. My mother scolded me with reprimands when she found out.”

This negative experience did not discourage Edwin, who always believed he had the temper and perseverance to finish a career in marine biology. The words of his mother made him reflect and straighten out his career path. “Things turned around when I started working on research projects with Dr. Edgardo Ortiz Corps and Prof. Cedar I. García Ríos.

According to Edwin, undergraduate professors Rufo Vega Pagán y Sonia Vázquez García deserve a special mention: “Rufo was the first one who offered me a job as a technical assistant for the Marine Biology Laboratory, which he directed. This job allowed me to learn a lot about the use and maintenance of different types of oceanography equipment, diving, and marine vehicles, among others. From Rufo I developed research skills working at sea and managing teams of field researchers. Sonia was essential in teaching me the importance of using simple language when communicating science to community groups, and providing them with technical expertise and empowerment opportunities.

In 1988, Dr. Hernández Delgado started his masters degree in biology at University of Puerto Rico at Río Piedras (UPRRP), specalizing in environmental microbiology under the mentorship of Dr. Gary A. Toranzos: “Gary was my first graduate school mentor in more ways than one, especially as it relates to the development of an unimpeachable research ethics and discipline. I also learned from him how to write research proposals and manuscripts for publication.”

Between 1993-2000, Edwin completed his PhD., also at UPRRP. His dissertation studied the impact of humans on Puerto Rican corals and was supervised by Dr. Alberto M. Sabat. Their mentoring relationship was so good that to this day they still interact and collaborate. “Alberto became my main mentor, a principal collaborator and a dear friend. Alberto helped me learn about experimental designs, statistical analyses, population model development, and scientific writing.”

Other college faculty who had a positive impact in Edwin’s career included Dr. Manuel J. Vélez, who recruited him as teaching assistant for a course on terrestrial and aquatic invertebrates of the Island; Dr. José Norat Ramírez, who collaborated with him to study the impact of low-quality water in Puerto Rico’s bodies of water and coasts; and Dr. Paul Bayman, who helped him research sick corals and their molecular microbiology. 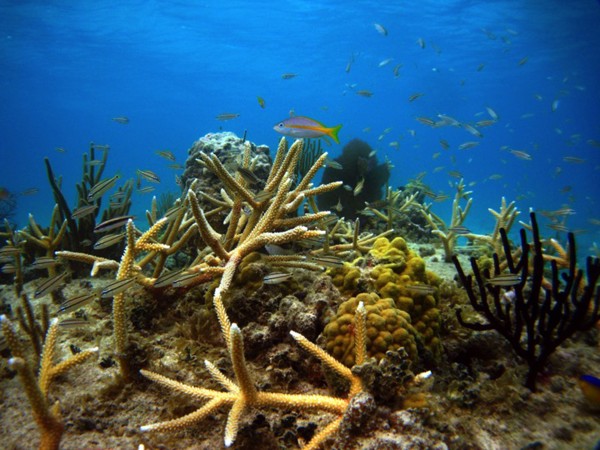 Landscape detail of a rehabilitated coral after bombing in Culebra

After his doctorate, Dr. Hernández Delgado has divided his time between teaching and research duties. He served as non-tenure track assistant professor (2000-2003), affiliated researcher and lecturer (2005 to the present) at UPRRP, and as adjunct faculty at Universidad Metropolitana (2013) and Universidad del Turabo (1997-2000, 2014). As a researcher, Edwin has worked for almost 10 years a the Center for Conservation and Applied Tropical Ecology (CATEC) and the Department of Biology at UPRRP.

“Ken was key in my preparation as a marine researcher, encouraging my research interest in protected coastal zones and offering me a one-year position in his projects sponsored by Environmental Defense. Dr. Appeldoorn, Director of the Caribbean Coral Reef Institute, provided key opportunities that helped me become one of the main marine scientists in Puerto Rico. Dr. Cuevas became my supervisor in 2007, when I became a research fellow at CATEC and received financial support from the National Science Foundation. There I was able to significantly expand my research capabilities in applied ecology and marine conservation, as well as collaborate with college students and non-profit organizations, such as Sociedad Ambiente Marino.”

Despite his broad experience as a college professor, about 50 peer-reviewed articles, and over 7 million dollars in research grants, one of Edwin’s main professional goals remains elusive: having his own laboratory and a tenure-track position: “All my life I have been successful at obtaining research funds. Although my area of research is unique, attractive for the institution, and of great value for the country, I have not yet received the opportunity to run my own research lab under similar, fair conditions as my peers. It is hard to constantly be worried about my professional future and whether I will get grant funding the next time.”

When talking about his scientific discipline, Dr. Edwin Hernández Delgado stated that there is a lot left to learn about corals and their roles within marine ecosystems: “I have been interested in corals since I first put on a snorkeling mask and fins at age 13. My main interest in corals comes from their extraordinary ecological role as reef builders and the fragility of their many species.” 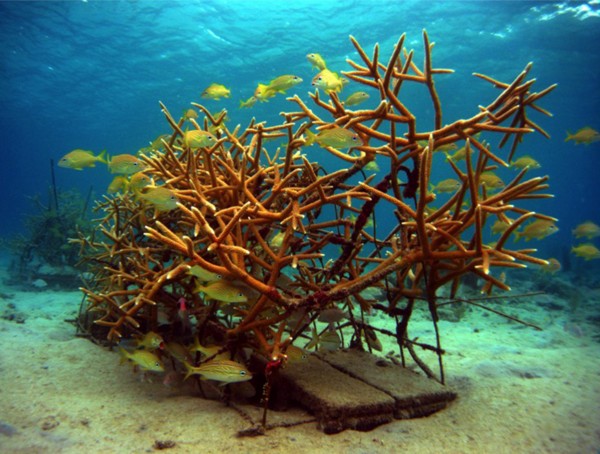 Culture unit of the Staghorn Coral (Acroporacervicornis) in Culebra

Edwin believes that scientists do not have a lot of time remaining to study corals because many of them are dying. “The future of corals is in peril due to the drastic environmental changes they have experienced in the last four or five decades, especially as a consequence of climate change and sea warming. My ongoing research suggests that we have lost between 60-80% of corals, and in some areas coral mortality has reached over 90%. It is critical to expand the study of the interplay between climate change, corals’ natural ability to recover, human-assisted restoration, and land-sea connections.”

When asked about how would he motivate young people to become interested in science and coral research, Dr. Hernández Delgado reflects: “The main thing is to be disciplined and persistent, but this does not mean being a nerd or a bookworm. It means identifying a motivation, establishing short, medium and long-term goals, and developing a good ‘navigation plan’. There are many questions about corals that need answers. It is a big challenge, but the opportunities do exist, and here in Puerto Rico we have all the tools needed to become leaders in this type research. As a country, we must assume this social responsibility.

The author is Associate Professor of Physics and Science Education at Morehead State University.

Coral reefs are threatened by climate change and human action

WHAT IS COVID-19 AND WHY HAS IT RECEIVED SO MUCH ATTENTION?
END_OF_DOCUMENT_TOKEN_TO_BE_REPLACED