This month, countries around the world celebrate the contributions of women—to our history, our heritage and, each day, to all factions of society. Although women have made many contributions to science, mathematics, engineering and technology, their achievements, sadly, have been often left out of the history books, as evidenced by the incredible recent discovery of Puerto Rican botanist Ana Roque de Duprey. This month we want to give voice to the stories of female scientists who inspire us: those who have left a legacy, as well as those who are currently working for the advancement of science.

To begin this month’s women’s history month commemoration, we have a guest post from Dr. Natasha Gutierrez, postdoctoral scholar from the Colón-Ramos laboratory at Yale University, who has taken on the task of celebrating a female scientist for each day in March. Natty, as she prefers to be called, highlights women in science, technology, engineering and mathematics (STEM disciplines, for its acronym in English) that have been inspiration for her in throughout her scientific career. Here we share the first seven profiles shared by Dr. Gutierrez. 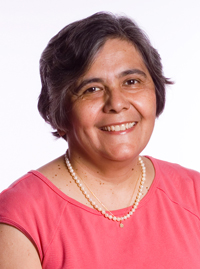 Day 1: To kick this off I am featuring Dr. Maria Elena Zavala, who received her PhD in Botany from the University of California, Berkeley. She is the second Chicana to earn a PhD in plant sciences in the U.S. She did her postdoctoral research at Indiana University, the USDA Western Region Research Center in Berkeley, and then at Yale University through a Ford Foundation-funded Fellowship. In 1986, she was awarded the Rosa Parks/Cesar, Chavez Visiting Professorship at Michigan State University where she was one the first scientists to localize a plant growth hormone in situ, using monoclonal antibodies in corn against the cytokinin zeatin. Dr. Zavala knows the importance of diversity in the sciences. She has served as the director of the MARC and Bridges to the Doctorate Programs, designed to offer mentorship, financial support, and research experiences to students from groups underrepresented in science. She was also named as one of the “hundred most influential Hispanics in the U.S.” by the magazine Hispanic Banner. She is so influential and amazing that she in 2000 she received the Presidential Award for Excellence in Science, Mathematics, Engineering Mentoring from President Bill Clinton. Dr. Zavala served as the first female President of the Society for the Advancement of Chicanos and Native Americans in Science (SACNAS) and is one of the faculty members of the Minorities Affairs Committee (MAC) of the American Society for Cell Biology (ASCB). She is currently a Professor of Biology at California State University, Northridge where her lab studies plant development, particularly focused on root development. I first met Dr. Zavala at an ABRCMS conference dinner. She continues to be an inspiration and a woman of wisdom every time we reconnect. Thank you for being one of my science heroes! 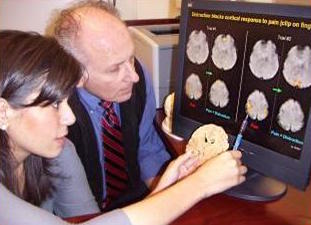 Day 2: Dr. Eleni Frangos received her PhD in Psychology-Behavior Neuroscience from Rutgers University. For her work, she received the Annual Rutgers Graduate School-Newark Dean's Dissertation Award. She is currently an Adjunct Professor in the Department of Psychology at New Jersey City University and an Assistant Research Professor at Rutgers University. Her goal is to secure a Postdoc in clinical neuroscience with a focus on brainstem imaging and understanding the therapeutic mechanisms of vagus nerve stimulation. Dr. Frangos and I were both in a program called MBRS, which supported students from diverse backgrounds attain a PhD. We both achieved our goal of getting a doctoral degree and I am so glad to share the same professional title as this amazing woman!

Day 3: Dr. Emily Wang received her M.D. from Duke University Medical Center. She is currently an Assistant Professor at Yale School of Medicine and the founder of “Transitions”, a network of clinics that offers health services to people recently released from prison and that helps facilitate their re-integration into society. Transitions began in 2006 with one clinic in San Francisco and now has 11 sites in several states and jurisdictions, including Puerto Rico and New Haven. Some of the clinics also provide care to family recently incarcerated. Dr. Wang has provided health services in prisons around the world, from North Carolina, south of China, and Botswana. These experiences have made Dr. Wang an expert on the health disparities experienced by the recently incarcerated and on the reforms that are needed to provide better health services to these populations. At Yale Medical School, Dr. Wang investigates how incarceration is a risk factor for cardiovascular disease and how correctional facilities can be a point of intervention to reduce various diseases in the community. She has written numerous scientific articles on imprisonment and its effects on health. Through her research Dr. Wang, who is also a member of CienciaPR, is a true advocate for those who traditionally have had no advocate in the United States. 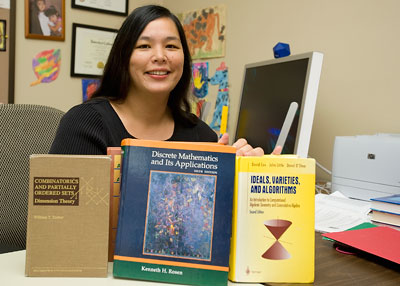 Day 4: Dr. Rebecca Garcia received her PhD in Mathematics from New Mexico State University. She is the first Chamorro (the native people of Guam) woman to receive a PhD in Mathematics. She is currently an Associate Professor and Program Coordinator of Mathematics at Sam Houston State University. Her research interests are in computational commutative algebra, algebraic geometry, algebraic combinatorics, and dimension theory of partially ordered sets (posets). Knowing the need for good role models in STEM fields, she oversees the Long Term Undergraduate Research Experience Program, which is funded by the National Science Foundation. She states "I feel that one of my job descriptions as a professor is to open as many doors for my students as were opened at one time for me." 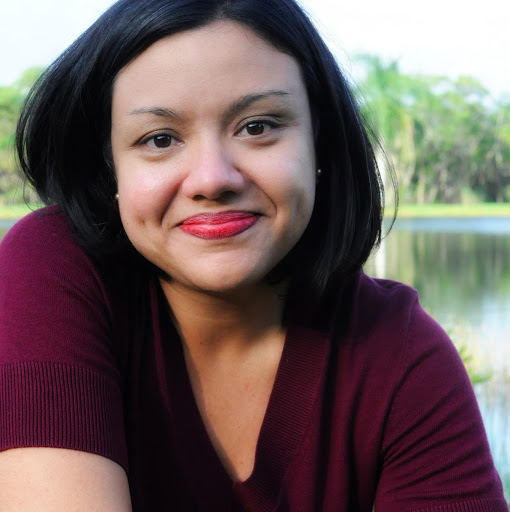 Day 5: Dr. Veronica Segarra, member of CienciaPR, received her PhD in Molecular Biophysics and Biochemistry from Yale University. During her Postdoctoral training at the University of Miami, she pursued her passion for teaching by also serving simultaneously as an Adjunct Professor of Biology at Miami Dade College. She is a faculty member of the Minorities Affairs Committee of the ASCB through which she helps the next generation of scientists. Until recently, she was a Visiting Assistant Professor in the Biology Department of Rollins College. On top of her teaching and mentoring, Dr. Segarra investigates the cellular compartments and proteins responsible for trafficking lipid membranes and membrane-associated proteins within the cell in response to stress and starvation, using baker's yeast as a model organism. She has accepted a position as a tenure-track Assistant Professor of Biology at High Point's University, which was named as the Best Regional College in the South in 2014 by “U.S. News & World Report”. She is an amazing woman of color and a mentor to those who are trying to make their way into the scientific community. I am proud to have her in my circle of mentors and she is definitely a role model to our community and in my life! Thank you for being in my life! 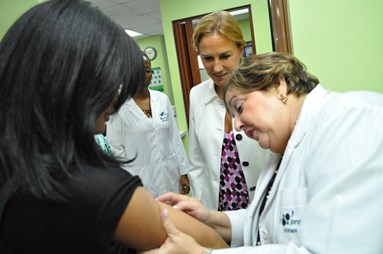 Day 6: Dr. Vivian Brache is the Director of the Department of Biomedical Research of Profamilia, a non-profit organization in the Dominican Republic that is dedicated to providing sexual and reproductive health services. Dr. Brache conducts research on new contraceptive methods in the hope of reducing the global spread of HIV and other sexually transmitted infections. Initial studies in her department have led to several long-term contraceptive methods like the Copper T, the Mirena and other intrauterine devices. Dr. Brache has written more than 120 scientific articles. Her expertise is recognized worldwide, a reason why she is a consultant to the International Committee of Contraceptive Research of the Population Council and to the Contraceptive Research and Development Program, and a member of the American Regional Advisory Panel of the Department of Reproductive Health and Research at the WHO. 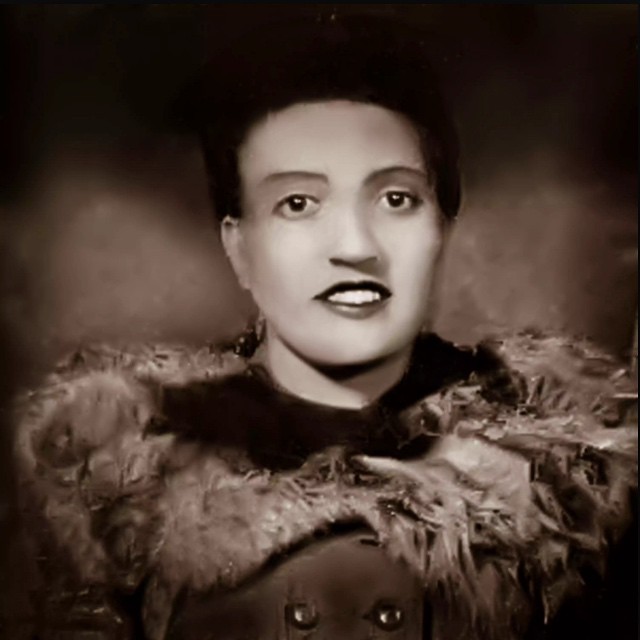 Day 7: In honor of #blackoutday, a social media campaign that was observed a few days ago to celebrate black beauty, I would like to highlight a woman who contributed much to biomedical research despite not having a doctorate: Mrs. Henrietta Lacks. She died of cervical cancer and her cells were taken from her body without her permission. These cells, known worldwide as HeLa cells, are commonly used in studies of cancer, viruses, genetics and have contributed to a large number of scientific discoveries. In fact, Dr. Jonas Salk used HeLa cells to develop the polio vaccine. Henrietta Lacks’ cells have been used in the development of many technologies, inventions and patents. The family of Mrs. Lacks first learned of the use of her cells in the 1970s and has never received financial compensation. However, they have recently reached an agreement with the National Institutes of Health (NIH) giving them automatic recognition in publications using HeLa cells and providing them with supervision over studies using the cell line’s genome. To read more about the life of Henrietta Lacks I recommend Rebecca Skloot’s book "The Immortal Life of Henrietta Lacks" and this article recently published in the blog "For Harriet".

Is there a woman in science who inspires you, in the same way that these remarkable scientists inspired Natty? Share her story with us by contacting us at our email address, or through social media (@CienciaPR) with the hashtags #borinquena #WHM #WomeninSTEM.

Puerto Rican scientist one of 40 Women to Watch

WHAT IS COVID-19 AND WHY HAS IT RECEIVED SO MUCH ATTENTION?
END_OF_DOCUMENT_TOKEN_TO_BE_REPLACED