Faced with a difficult problem, many throw their hands up and say "it is what it is", but instead of problems, a leader sees opportunities. Enerys Pagán, a young Puerto Rican woman who is currently a junior at the Brígida Álvarez Rodríguez Specialized School for Science and Mathematics in the town of Vega Baja, saw a problem in the lack of participation of Puerto Ricans boys and girls in science fairs and she decided to do something about it.

Ever since she was little, Enerys has had interests in community service and leadership. At age six she joined the Girl Scouts and today she is a member of Troop 252 of Toa Alta, Puerto Rico. Since the day she joined the girl scouts, she has always strived to practice the slogans of that organization: "be prepared to help" and "do an act of kindness a day." Through the Girl Scouts, Enerys also found a way to develop her interests in science and technology and to apply these interests for the benefit of others. Since 2011 she volunteers at the Manatee Conservation Center of the Inter American University of Puerto Rico, and in 2013, she won the Scouting Silver Medal for "Read, Learn and Care for Our Manatees," a project where she gave lectures at schools about manatee conservation and the work carried out by the Center. 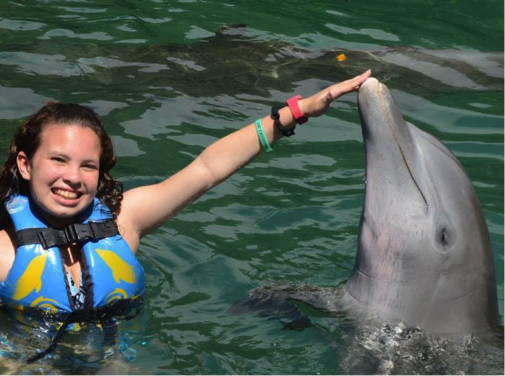 Enerys is an advocate of marine conservation and worked several years as a volunteer at the Manatee Conservation Center of Puerto Rico (Photo: supplied by Ms. Pagán)

Enerys' passion for science and technology is remarkable. Since 2009, she has been an active member of the Girl Scouts Robotics Team of Puerto Rico where she has worked as a designer, engineer, programmer and pilot of robots. In 2012 she had the chance to compete with her team during the World VEX Robotics Championships in California. She has also successfully participated in many science fairs at local, national and international level including in the 2013 Google Science Fair, the I-SWEEEP Science Fair in Houston, TX, and the CienTec conference in Lima, Peru. 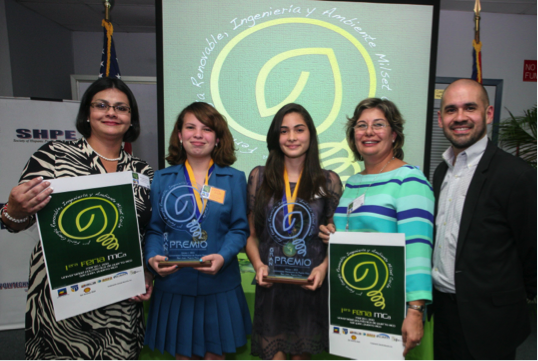 Enerys received the Grand Prize at the 1st Milset Caribbean Fair in 2013, which qualified her for the I-SWEEEP science fair (Photo: Polytechnic University of Puerto Rico)

During her participation in these science fairs, Enerys observed that there were very few Puerto Ricans presenting well-developed research projects. She decided to do something about it,  and so in 2014 she decided to launch Young Scientists for Puerto Rico (Jóvenes Científicos por Puerto Rico), an organization dedicated to providing information about science fairs and research opportunities, and creating a scientific culture to solve problems relevant to our community. Sponsored by the Department of Education of Puerto Rico, in collaboration with several universities, private companies, and nonprofit organizations, this group has offered workshops on scientific research in public schools throughout the island. 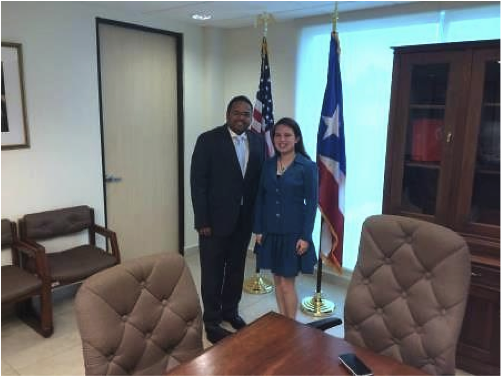 Meeting with Mr. Rafael Román, Secretary of the Department of Education of Puerto Rico on June 4, 2014. (Photo by: José M. Pagán González) 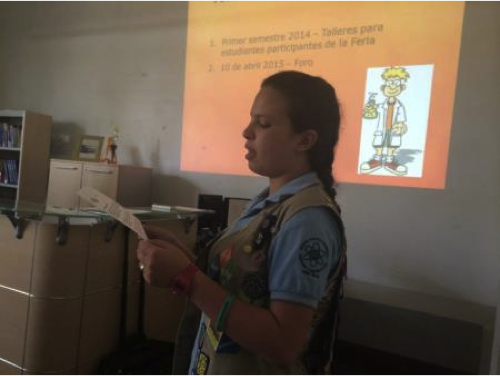 The project of Young Scientists by Puerto Rico will hold its First Forum on Science and Technology on Friday April 10 at the American University of Bayamón with a display of research projects by students in grades 9-12 from Puerto Rican schools specializing in science and math. Dozen of students are expected to participate, presenting the results of studies that for many represent the first time that they apply their science knowledge to test their ideas or develop new technologies. It will be a historic gathering, where all Puerto Rican schools specializing in science and mathematics will be united in one purpose: to make a better Puerto Rico! 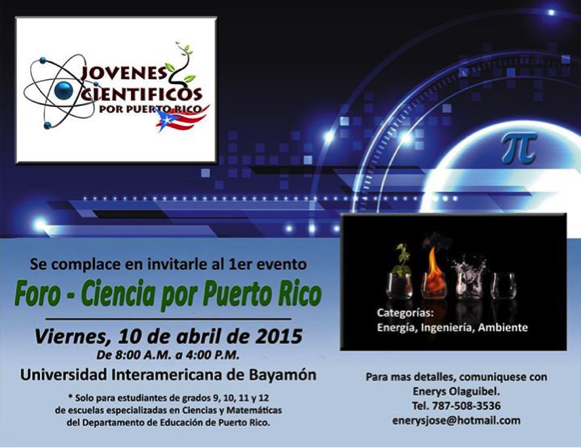 Meanwhile, Enerys continues to exploring her scientific curiosity and advancing her goal of one day becoming a mechanical engineer. This year she participated in the Metropolitan Science Fair of Puerto Rico where she presented her progress in developing a new process to break apart the carbon dioxide molecule in order to reduce atmospheric levels of this gas, which causes global warming and the greenhouse effect. For her work on this project, done in collaboration with engineer Ramón Rivera Varona of the Polytechnic University of Puerto Rico’s Plasma Laboratory, Enerys received six awards at the Metropolitan Science Fair, including second place in the category of Environmental Sciences and first place for the Aidis Environmental Engineering Award.

The project also earned her an invitation to the Golden Climate International Environmental Olympiads that will be held starting April 29 in Kenya, Africa. She is the first Puerto Rican student to be invited to this event and the only student from the western hemisphere to qualify in the category of environmental sciences this year. She is currently seeking public support to collect the necessary funds for the trip.

Undoubtedly, Enerys is driving a change in getting more high school students in Puerto Rico engaged in science. According to Enerys "Science has been my passion since childhood and my main interest is to motivate others to strive to achieve their dreams and to help them obtain the necessary tools." Reading her story, we are confident that Enerys is making her dreams a reality for the benefit or Puerto Rico. Enerys is definitely sowing seeds of success.

To help Enerys to attend the conference in Kenya, please contribute to her GoFundMe campaign: http://www.gofundme.com/eneryspagangc

Borinqueña emphasizes on the contribution of Puerto Rican and Hispanic women in science and technology and provides a space to discuss topics of interest about the empowerment of women. Through 'Seeds of Success' we share stories about young Borinqueñas that want to pursue a career in STEM, and will describe their achievements and goals to succeed.

Use #Borinqueña to share this story. Also, visit our

WHAT IS COVID-19 AND WHY HAS IT RECEIVED SO MUCH ATTENTION?
END_OF_DOCUMENT_TOKEN_TO_BE_REPLACED