PDF version
The direct costs of osteoporosis are estimated around $18 billion annually and they are expected to rise two-fold by 2050.

Did you know that 5-10% of your bone is replaced every year? And that both females and males can develop osteoporosis? 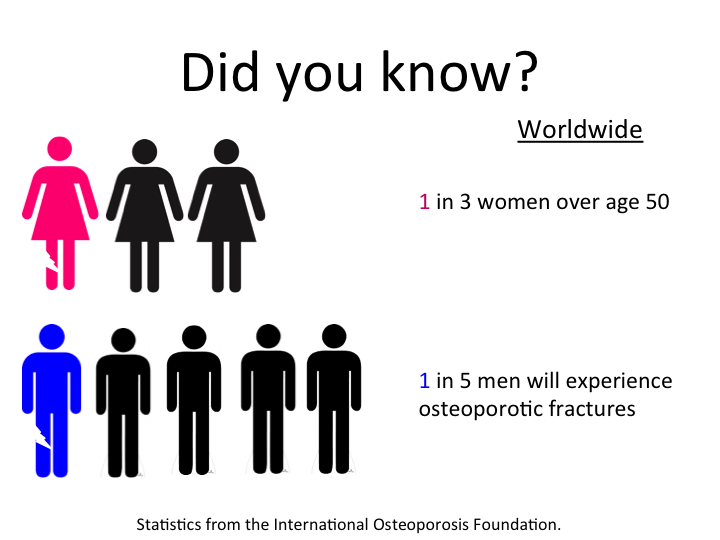 Bone remodeling, the process by which new bone is formed and old bone is removed, is in charge of keeping your bones strong and healthy. This process is a continuous and tightly regulated cycle that requires interaction between two important cells, the bone forming cells (osteoblast) and bone degrading cells (osteoclast).

The bone remodeling cycle consists of four consecutive phases: activation, resorption, reversal, and formation (Figure 1, below). The first phase, the activation phase begins when pre-osteoclasts cells differentiate into mature osteoclasts.  Then, during the resorption phase, the mature osteoclasts start to eat and digest the old bone. Subsequently, there is a reversal phase in which the osteoclast finishes their work (removing the old bone).  At this point, the bone surface is ready for the new bone to be formed by the osteoblasts.  During the last phase, bone formation, occurs when osteoblasts start laying down new bone until the old bone is completely replaced by new bone. 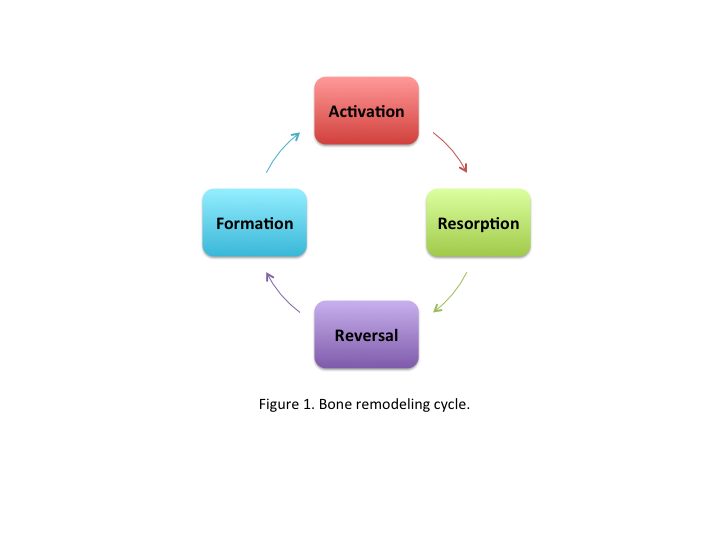 Bone remodeling is a lifelong process and each one of the stages outlined above can have different lengths. For example, bone resorption can last for 2 weeks; the reversal phase up to 5 weeks; meanwhile, bone formation can continue for up to 4 months or until the new bone is completely formed1.

Around the age of 15-20, the bones are fully developed and remain stable until the age of 502. However, after this age, there is a gradual and progressive decline in bone density due to an imbalance between the bone cells (osteoclast and osteoblast) during the bone remodeling cycle. This imbalance in communication often occurs due to an increase in osteoclast activity and a decrease in osteoblast formation3. When this imbalance is not controlled it can lead to osteoporosis.

Osteoporosis is a disease in which the bones become brittle and fragile. As the bone becomes more fragile, the risk of fracture is greatly increased and the quality of life of the patient is affected. Some of the complications include chronic pain, immobility, disability, and death. Therefore, it’s important to start taking care of our bones. 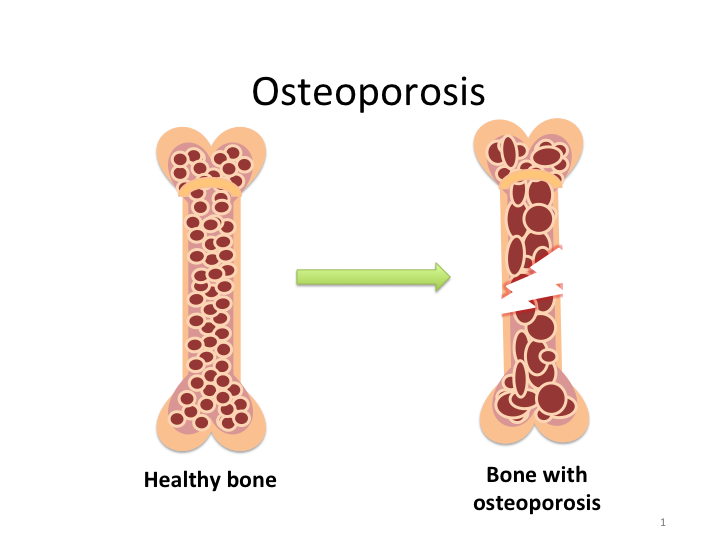 Currently, the direct costs of osteoporosis are estimated around $18 billion annually and they are expected to rise two-fold by 20504.  The greatest increase in costs is estimated to be 175% for the Hispanic population5,6.  No direct studies are available regarding the prevalence of this disease in Puerto Rico . However, in a study of five Latin American countries, which included Puerto Rico, the prevalence of vertebral fractures in women over the age of 50 was about 15%, 7% of fractures occurring within the 50-60-year-old age group and increasing to 28% for those over 80 years of age.  By 2020, it has been estimated that more than 14 million adults in the United States over the age of 50 will present signs of osteoporosis6.

Who is at risk of having osteoporosis?

Although everyone needs to be concerned about their bone health, females over the age of 50 are more susceptible to developing osteoporosis.  After menopause, females can lose around 20% of their bone mass within the subsequent 5-7 years. However, according to the International Osteoporosis Foundation, by 2025 the number of hip fractures occurring worldwide in men will be similar to that observed in women7.

Factors such as ethnicity, family history regarding the condition, and poor bone density and structure during a young age can also contribute to bone loss.  In addition, people with a poor diet, specifically low in calcium and vitamin D consumption, can have weakened bones since these nutrients are required for bone formation and maintenance.

Lack of high-impact exercises such as hiking and running can increase the chances of developing osteoporosis because bones become weaker due to lack of inactivity. Finally, drug addicts and alcoholic people are also at risk of having osteoporosis.

How can you improve bone health?

How to test for osteoporosis?

After consulting with your doctor, if there’s any concern about your bone health, he can recommend that you undergo a dual-energy X-ray absorptiometry scan (DEXA scan). This test is the only one specifically designed to estimate your bone mineral density (BMD) before a fracture occurs.

The DEXA scan is brief and painless. It uses X-rays to measure how many grams of calcium and other bone minerals are packed into a segment of bone. The bones that are most commonly tested are the spine, hip, and forearm. The results will be expressed as a number called the T-score, which will tell you if your bone density is above or below the standard. The standard is defined as the bone mineral density of a young healthy adult and the numerical value given is zero. Therefore, if your T-score is negative that means you have bone loss.

As always, the best way to avoid or minimize the impact of health conditions is to visit your doctor regularly and consult with him/her regarding any concerns you may have.  In this way, you can take preventative measures that will allow you to increase your well-being now and for years to come.

5. Johnell, O. & Kanis, J. A. An estimate of the worldwide prevalence and disability associated with osteoporotic fractures. Osteoporosis international : a journal established as result of cooperation between the European Foundation for Osteoporosis and the National Osteoporosis Foundation of the USA17, 1726-1733, doi:10.1007/s00198-006-0172-4 (2006).

WHAT IS COVID-19 AND WHY HAS IT RECEIVED SO MUCH ATTENTION?
END_OF_DOCUMENT_TOKEN_TO_BE_REPLACED