Puerto Rico is well known, globally, as a leader in biosciences.  This is mostly due because we train and educate professionals of the highest caliber in these disciplines.  For this, we have to thank Dr. Graciela Candelas, a professor and pioneer researcher who revolutionized biology education in Puerto Rico.

Graciela Candelas was born in Mayagüez, Puerto Rico in 1922.  She received motivation to study sciences from her father, Teobaldo Casanova, a statistical psychologist.  He encouraged Graciela and her sisters to pursue careers in science because “they could learn the humanities at home”.

Graciela obtained her bachelor’s degree from the University of Puerto Rico at Río Piedras (UPRRP) in 1944.  Her career in academia started in 1951 as an instructor at the Department of Biology at UPRRP.  During that time, she worked as director of the Marine Laboratory, known today as Department of Marine Sciences (DMS), and in 1956 she taught, for the first time in Puerto Rico, a marine biology course at La Parguera, Lajas.

Shortly after, Graciela moved to North Carolina, where her husband, Dr. Gustavo Candelas, was working as a professor.  In 1957 she started her master’s degree at Duke University.  She studied marine biology, specifically, the effects of salinity and seasonality on marine sponges Hymeniacidon heliophila.  She demonstrated that low temperatures, and the interaction of winter algal flora regulated the distribution of H. heliophila. Her work was published in the scientific journals Ecology and in th prestigious Nature. 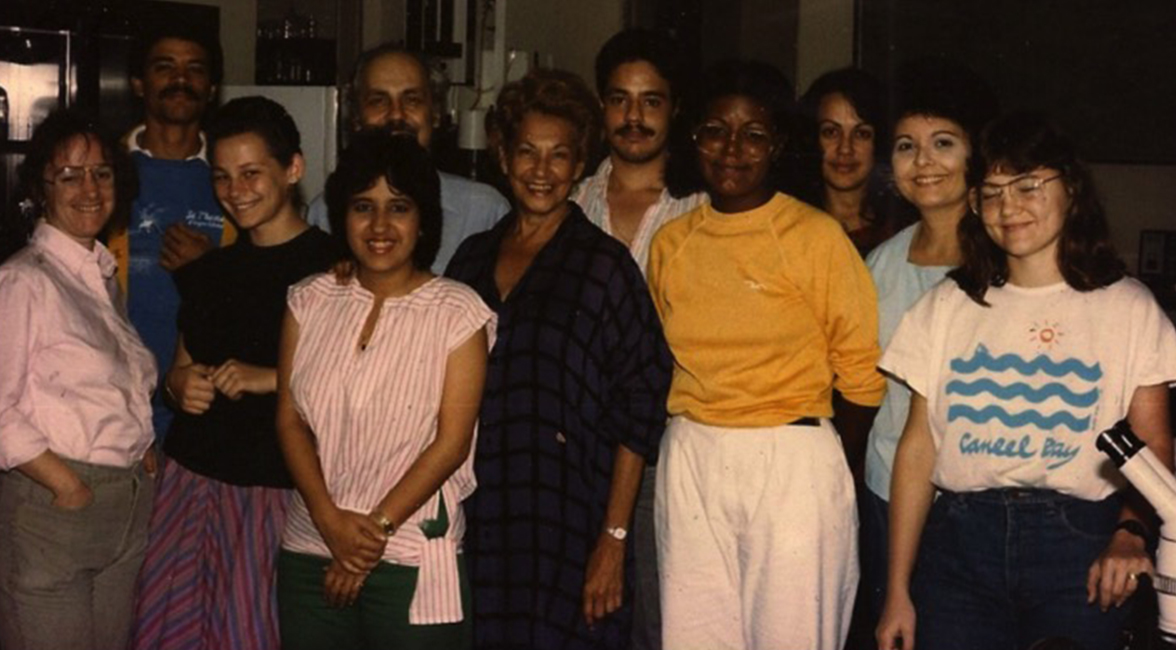 Dr. Candelas with a group of her students. Photo courtesy of Dr. Fernando Renaud.

Graciela finished her master’s in 1959, and started working as a professor and mentor for biology majors at UPRRP.  Her passion for science, teaching and innovation was soon demonstrated.  She actively participated in the creation of fundamental courses for the biology curriculum on campus.  In the decade of 1960, she introduced the courses “Cellular Biology”, and “Modern Topics in Biology”.  A few years later, she introduced the courses “Biochemistry”, “Molecular Aspects of Developmental Biology”, “Cell Physiology Seminar”, and “Biochemistry Seminar”.  Graciela was also the first person that brought an ultracentrifuge to Puerto Rico, an indispensable tool for research in biological sciences.

After working for three years as a professor, Graciela started doctoral studies at the University of Miami.  For her research, she used sea urchins as a cellular model to determine the role of polysomes in protein synthesis, a process that was not well understood at the time.

Although Dr. Graciela Candelas started studying marine sponges and sea urchins, she decided to study a terrestrial animal model: the spider.  Her lab dedicated more than two decades to the study of Nephila clavipes, a spider that produces very strong silk fibers.  However, rather than the strength of the threads, Dr. Candelas and her team were interested in the molecular control of the production of fibroin, silk’s main protein.

Results from her research have been published in prestigious scientific journals and books, and have been presented at both national and international conferences.  As an active member of the American Society for Cell Biology (ASCB), Dr. Candelas attended their conferences annually, always accompanied by her students. 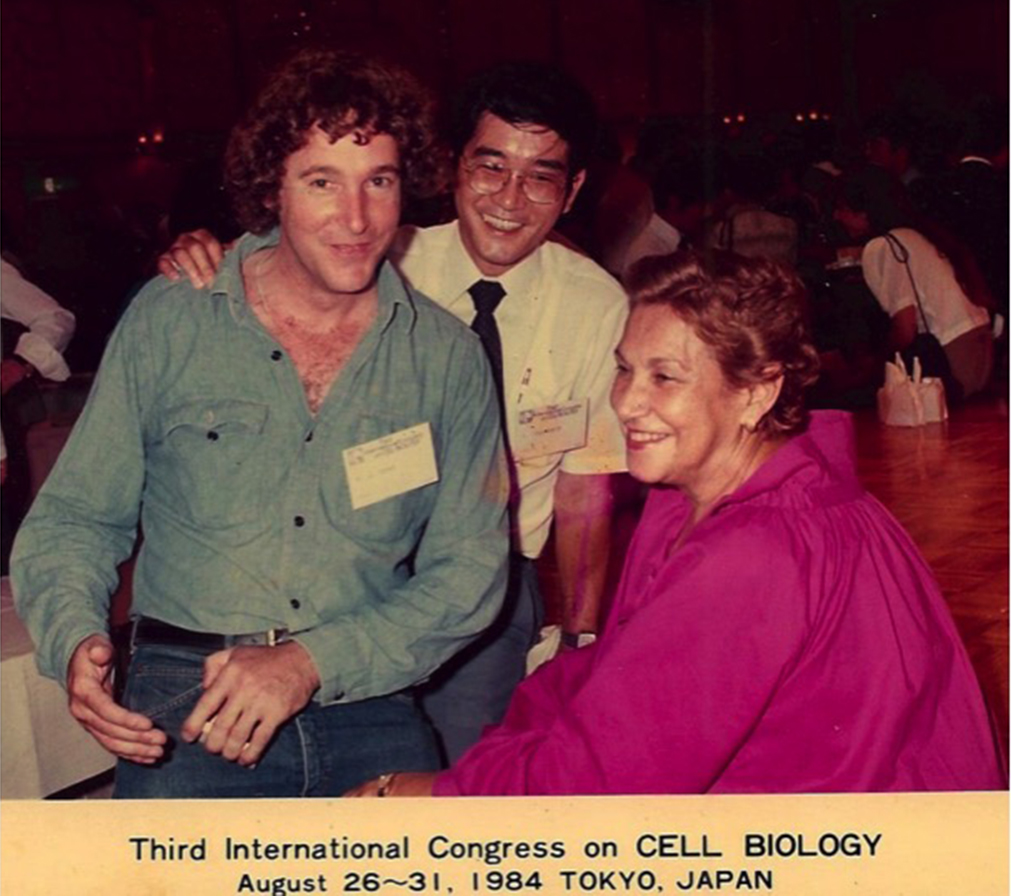 If you know someone who did research at Dr. Candelas’ lab, you would probably know that it was common to see students carrying home a box of Bombyx mori larvae, acting like baby-sitters during academic holidays or long weekends.  Her students took their responsibilities seriously, and developed excellent research practices.  Working at Dr. Candelas’ lab was not only about following a protocol like a recipe.  Rather, students were encouraged to know the reagents being used, why they were used, and the mechanisms behind each method.

Much more than science

Dr. Candelas has described her laboratory as “the most beautiful in the world”, and her students agreed.  Among them, Dr. Aníbal Soto Cardalda, a researcher in the private sector, remembers that her lab, in addition to state-of-the-art equipment, had original paintings from Puerto Rican Julio Rosado del Valle, and American Georgia O’Keefe.  Dr. Fernando Renaud, a former professor at the Biology Department of UPRRP, remembers that “with Graciela you learned about science, art and culture”.

In fact, whenever Dr. Candelas took her students to present their work at conferences, she would always take them to visit a museum.  It is worth mentioning that in addition to her love for science, she enjoys movies, the theater, collecting art from artists from all over the world, and playing the piano. 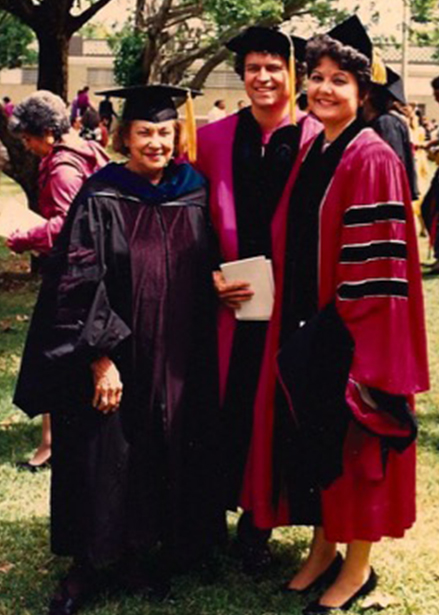 Dr. Candelas at the commencement of her doctoral students Adolfo Plazaola and Clara Carrasco.

Dr. Candelas’ successful career, and her creative and innovative vision have made her the recipient of prestigious distinctions.  In 1978 she was elected for the American Men and Women of Science.  In the decade of 1980, received the Special Science Award presented by the Institute of Puerto Rico in New York, and the Distinguished Alumnus Award from the Alumni Association of the University of Puerto Rico.  In 2003, she received the Premio Domingo Carrero: “Pionera en Campo de Biotecnología”.

The American Society for Cell Biology, and the Microbiology Society of Puerto Rico have recognized Dr. Candelas’ contributions to science and biotechnology.  Last year, the Caribbean Division of the American Association for the Advancement of Science (AAAS) dedicated its conference to her.  Since 2004, Dr. Candelas received the title of Distinguished Professor of the UPR. 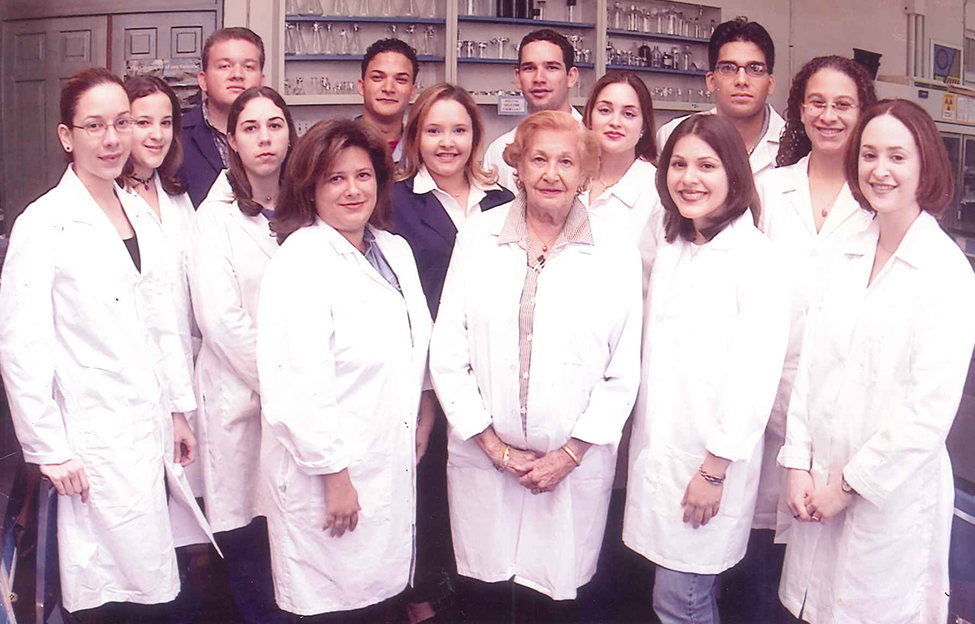 Dr. Candelas with her most recent group of doctoral students. Photo courtersy of Mrs. Millie Viera.

Dr. Candelas was a mentor of over a hundred undergraduate students and dozens of graduate students.  To date, her former mentorees are leaders at teaching and research institutions or in the private sector.  However, whether in academia or industry, all of them agreed that their love for science and research started in Candelas’ lab.

Dr. Graciela Candelas revolutionized research and biology education in Puerto Rico.  Ciencia Puerto Rico celebrates her as an example of excellence, and of how scientists contribute to the advancement of science.

WHAT IS COVID-19 AND WHY HAS IT RECEIVED SO MUCH ATTENTION?
END_OF_DOCUMENT_TOKEN_TO_BE_REPLACED