It is a great honor to share with you an essay by renowned architect Fernando Abruña, a leader in "green" and sustainable design.

About 40 years ago when my career as an architect began, I was convinced that our work as designers of natural or constructed spaces had a great impact on the environment. This belief was rooted in the counterculture movement that reigned during my years of college where slogans like "Flower Power" Give Peace a Chance, "Make Love Not War" and "I'm a Nature Lover" swarmed the different currents and cultural expressions. But this feeling also rooted, through my father’s scheduled travels, when I was barely six years old so I could truly learn up close to nature. He was a distinguished soil chemist and agronomist who taught me the true value of the land.

The energy crisis of 1973, that suddenly invaded the collective psyche of the contemporary world and paralyzed industry and banking systems was another hammer blow that paid my awareness of the importance of sustainability in our works, even before the term was coined. To see birds covered in oil spilled off the coast of Alaska, unable to fly, and their fragile lives at risk, unable to breathe, invaded even more in my sense of humanity for living things in this world we inhabit and whose resources we share with. 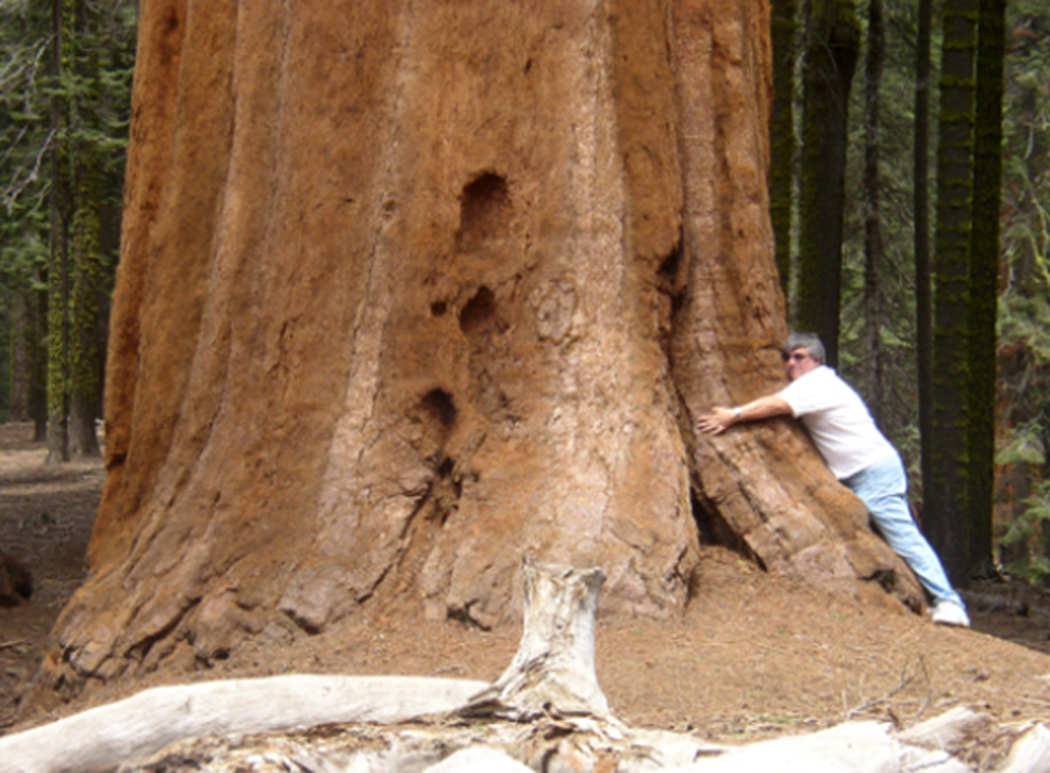 However, my conviction about the importance of sustainability, nature protection and conservation of our environment was one, more of intuitive character, emotional and pantheistic. I confess that I was a "treehugger" and I tied to trees on several occasions and scenarios where indiscriminating and ruthless cutting was proposed. After several years with a certain level of indignation, frustration and impotence in achieving positive change through this "feeling of love for nature," I decided that the most appropriate route would be a rational one, using scientific basis to manage arguments of architectural design.

There is a field of knowledge known as Building Science. This is defined as the set of experiences and scientific knowledge focused on the analysis and control of physical phenomena affecting buildings and architecture. Traditionally the detailed construction materials and building envelope include a detailed analysis. Issues related to the heat and humidity tend to dominate their focus. The practical purpose of this science is to provide predictive capability to optimize the performance of the buildings and prevent failures in their construction. This science is studied through technology courses in the various schools of architecture in the country but it is known to many that even with these courses many students and professionals fail to link this knowledge to the design and some see it even with some degree disdain as if knowledge were at odds with the other.

For the year 1979, a group of physicists, biologists, engineers, philosophers, mathematicians and architects started the “Meta Science Club " where we met fortnightly to discuss issues related to the philosophy of science . At these meetings we discuss the theories and writings of several prominent thinkers including  Irme Lakatos, Paul Feyerabend and especially, Karl Popper (Conjectures and Refutations, 1963) y Thomas Khun (The Structure of Scientific Revolutions, 1962) among others. From these discussions I developed a visión slightly more scientific and critical of what we do as architects. In a very succinct and brief and somewhat simplistic level, we can say that technology and design are the result of applied science and art respectively. From this viewpoint, although the design process is a heuristic or inventive, we could infer that the architecture, the way it is currently practiced, is an ideology.

An ideology is a set of conscious and unconscious ideas that constitute broadly, objectives, expectations and actions one takes as a person. Architecture as ideology is a way of seeing the world, a set of ideas proposed by the dominant class (the architects in this example) of society, over the remaining members of this one. An ideology, however, is not necessarily a rational basis. An example of this is the comment that we made regarding the Building Science, where we discussed the separation between scientific knowledge and design knowledge.

After many reflections I developed a great respect for two people who do not traditionally practiced our profession using reason and scientific structures of thought as the basis of their actions: Buckminster Fuller (Synergetics, 1982) and Christopher Alexander (A Pattern Language, 1977). The work of these two visionaries was of such magnitude that of the first, I ended up doing my doctoral studies to learn about him and the second was a virtual mentor whose books, in my quest for that knowledge, I feverishly devoured.

In the year 1995, as professor of the school of architecture of the UPR, with the architect Rafael Pumarada and Dr. José Molinelli, of the Environmental Science Program, we initiated an academic project design workshop for 5th year students to propose conservation strategies that ultimately resulted in the Forest Act of the New Millennium which seeks to conserve and protect the 400 remaining forest acres in the metropolitan area of San Juan. Among the arguments outlined, we analyzed the costs of air conditioning that would impact a home without the benefit of the shade tree with an average height of 20 feet and 20 feet in diameter. Using shade criteria, electricity costs and factors developed by the American Society of Heating Refrigeration and Air Conditioning Engineers (ASHRAE) we could enhance each tree in the proposed forest. The equivalent savings in air conditioning is about 5 kWh/day/tree for a bedroom in shadow, which roughly translates into $ 548/year/tree. We had estimated the existence of nearly 200,000 trees for the forest of the third millennium. Projected energy economies for the forest conservation accounted for more than $ 100 million a year. Similarly but from another point of view, we developed an algorithm to determine that in order to offset the carbon footprint of the average Puerto Rican , each of us needs to plant about 800 trees. These are just some of the scientific bases that have cemented our vision for the development of our professional practice. 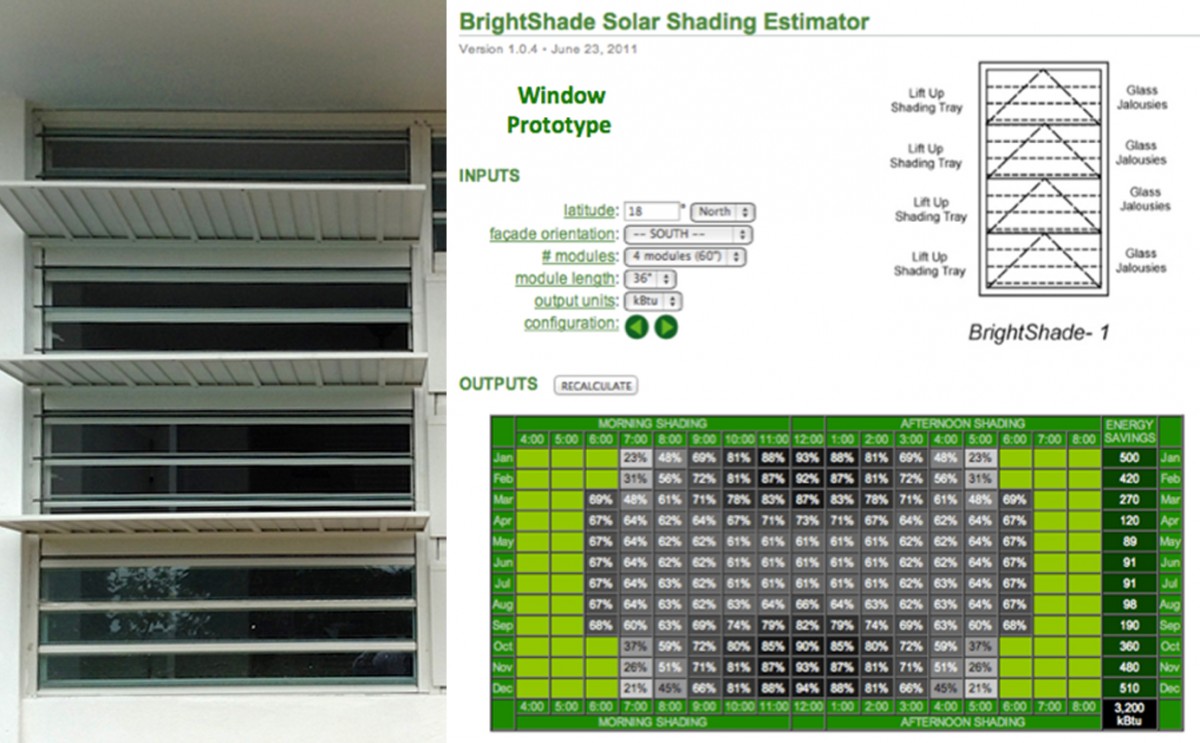 More recently we experimented with the design of a window using the strategy of mimesis of nature as the scientific basis for their performance. The window is inspired by the eyes of a camel which are endowed with three eyelids! Two of them have eyelashes and the third is thin and transparent to protect it from sandstorms in the desert. Using this model we develop the BrightShade© (Patent Pending) window that is currently manufactured by the Valcor® company in Gurabo. This module consists of three glass louvers shade and a tray that acts as an eyelid over the glass louvers. BrightShade is actually the evolution of the louver windows traditionally used in the Caribbean. The shadow tray acts as an overhang keeping the blinds glass in shade reducing the passage of solar radiation without affecting the properties to achieve good natural lighting and ventilation.

We developed a computer model that showed the efficiency of the window achieving periods of recovery from the investment of four years for mechanically cooled spaces. More recently we made a successful installation in the proposed social housing Ecohab that achieved the Energy Star Certification. By using these windows and extensive use of insulation in walls and ceilings, we could cool the whole house with one unit of only 15,000 Btu. 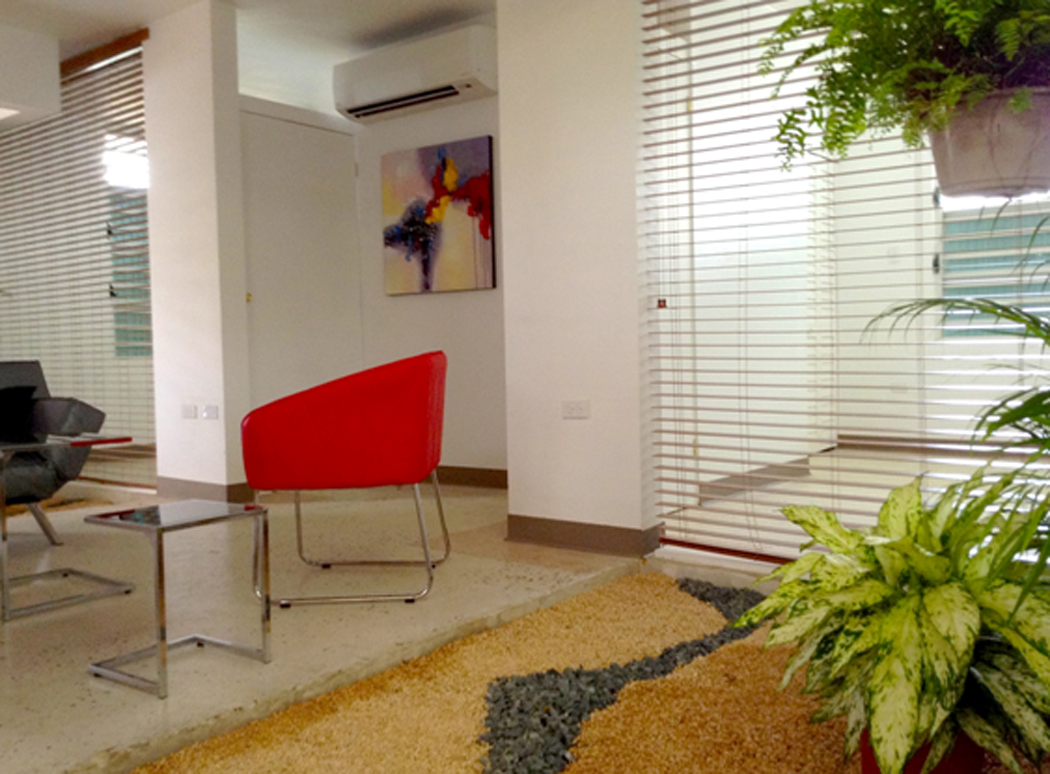 What about the architectural beauty? Can the beauty of a building be appraised with scientific and rational criteria? My way of viewing this issue can be summarized with the following argument. If the design of my building assumes a substantial reduction on energy consumption and carbon dioxide emissions and at the same time conduces a healthier environment to its users, protects nature and assumes a reduction on the cutting of trees of some forest in the planet in whose branches the birds can make their nest and in whose leaves develop the process of photosynthesis, which in turn provides the foliage whose shadow results in lower incidence of solar radiation, I consider my building as a beautiful one. In addition, I use the maximum useful Bucky Fuller’ phrase which reads as follows: "I never think about beauty, but when I finish, if the solution is not beautiful, then you know that the solution is wrong."

We are thankful to Dr. Fernando Abruña, FAIA, for this contribution. Abruña is a renowned architect well known as the “Father of Green Buildings Movement” in Puerto Rico. Abruña, who was a professor in the School of Architecture of the University of Puerto Rico, obtained a doctoral degree in Science of Design in 1977 from International Collage of California. Currently is president of the sustainable architectural firm Abruña & Musgrave, Architects. You can find more information about Dr. Abruña on his profile page in CienciaPR.

WHAT IS COVID-19 AND WHY HAS IT RECEIVED SO MUCH ATTENTION?
END_OF_DOCUMENT_TOKEN_TO_BE_REPLACED