José: "Greetchen, our guest Dr. Ángel M. Nieves-Rivera is a marine biologist dedicated in part to biospeleology, and he shares with us a photo of the ‘Cueva Lirio’ at the Mona Island."

Greetchen: " Ángel, Where in the Mona Island is ‘Cueva Lirio’ located? "

Ángel: "The cave is located at the east side of the island, in the village number 24 according to the current map of the Natural Reserve of de Mona and Monito Islands, prepared by the Department of Natural and Environmental Resources of Puerto Rico (DRNA for its acronym in Spanish).”

José: What is the espeleological importance of this cave?

Ángel: "This gigantic cave dominates the southwest view reaching ‘Playa de Pájaros’ and part of ‘Punta Los Ingleses’. The cave runs the border and delves into the bowels of the plateau near the old lighthouse of ‘Punta Este’. The cave has majestic and spacious halls such as the Cathedral Room as well as indoor gardens, spectacular windows, thundering falls and with exclusive views. It also has speleothems and spooky formations caused by both hydro and wind action. Photographically speaking, the cave is an ecstasy. Although you can visit it a thousand times, you will never get tired of such beauty…

Greetchen: "What ecological importance can you higlight about this cave? "

Ángel: "The cave is home to various species of sea birds such as Booby(Sula spp.) and white-tailed tropicbirds (Phaeton lepturus), which nest and use the cave as shelter. Endemic ‘Mariquitas’ (Agelaius xanthomus) are also observed. From the cliffs you can see fish and hawksbills. Other occasional visitors are domestic goats (Capra hircus aegagrus ) and pigs (Sus scrofa), and smaller mammals such as rodents and bats. It is suspected that time ago there were significant populations of bats but now extinct. Invertebrates such as crabs, cockroaches, spiders and pseudoscorpions, among others, inhabit the caves of the island." 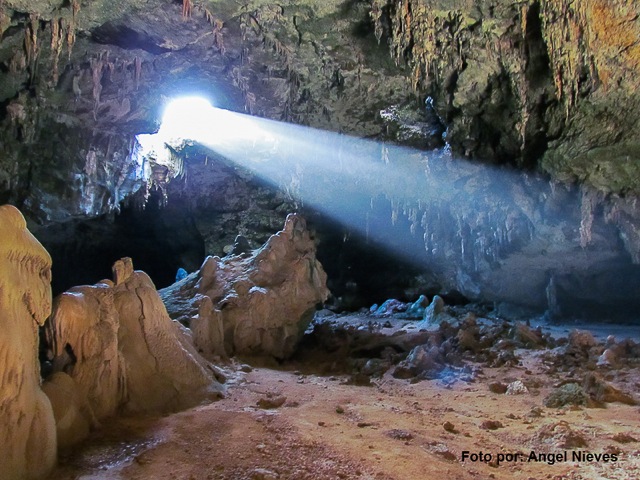 A view of "Cueva del Lirio" at the Mona Island

José: "Why is this cave different?"

Ángel: "From a paleontological point of view, this unique cave contains an intriguing amount of subfossil bones and fossils that only a few have been studied. In the past it was found hutias (Isolobodon portoricensis) bones, now extinct. In this cave the unknown terrapin of Mona, alias Testudo (Monachelys) monensis was described by American paleontologist Ernest E. Williams in 1952. Currently, these fossils are under scientific scrutiny."

Greetchen: "What historical importance is attributed to ‘Cueva Lirio’? "

Ángel: "The halls of the cave were desecrated at the time of guano mining in the mid- nineteenth century to the early twentieth. The cave was slowly excavated to remove phosphates from guano and used it as a fertilizer and also for gun powder. An estimated 150,000 tons of guano were removed in Mona by primitive methods according to Frank Wadsworth.

José: "Very interesting. You say that ‘Cueva Lirio’ is important in the annals of the Boricua meteorology? What do you mean?”

Ángel: "In ‘Cueva Lirio’, several people including scientists, have passed fearsome weather phenomena such as hurricanes. Some of those few daring includes American Thomas A. Wiewandt, who studied the biology of the Mona endemic land iguana (Cyclura stejnegeri). He handled Hurricane David and Federico in the cave in 1979. Likewise, maritime historian and genealogist Walter A. Cardona Bonet (WACB) also reports having seen the effects of Hurricane Gilbert in 1988 in the cave. Also, ‘Cueva del Lirio’ has been a mute witness of shipwrecks and groundings at various times and the loss of many lives."

Greetchen: "Have you been over there recently? Tell us ..."

Ángel: "Recently, I was part of a scientific expedition with colleague WACB and ecologist, Félix López Arroyo, to document and study historical aspects of the caves. We focus particularly on the remnants of the mining era, drawings or prints in the caves of the time and myself researched aspects of paleontology in several caves of the island. What do I expect to find ? Well, as the Egyptologist Howard Carter said when he first saw the hidden tomb of Tutankhamun... "I see wonderful things! ... ‘Cueva del Lirio’ - like all Mona- unites the past, present and future at once. It is the last great natural legacy of our borincano archipelago and has been keptintact due to its inaccessibility... Lets conserved them!"

Speleology of the Mona Island

The Island that only a few know

Ship run aground in Mona a big environmental threat

WHAT IS COVID-19 AND WHY HAS IT RECEIVED SO MUCH ATTENTION?
END_OF_DOCUMENT_TOKEN_TO_BE_REPLACED