PDF version
Dr. Arratia has been recognized at a national level for his student mentoring

Some people think that helping others is the key to success.  For Dr. Juan F. Arratia a fundamental part of his professional life has been to provide his students with the necessary tools and experiences to reach their goals.  Dr. Arratia has dedicated his life to helping Puerto Rican students to obtain a career in science, technology, engineering and mathematics (STEM).

Dr. Arratia, a native of Pomaire, Chile, did most of his schooling in his country of origin.  However, he did his senior year of high school in the United States as part of an exchange program.  This experience had a profound effect on his life and it was the moving force behind his decision to obtain a doctorate.  Because Mathematics were always his passion, Dr. Arratia decided to pursue studies in a field in which they could be applied.  For this reason, after returning to Chile, he completed his bachelor’s degree in Electric Engineering and then obtained the prestigious Rhodes International scholarship to obtain a master’s degree in Engineering at Louisiana Tech University.  Just like he had planned, after finishing his master’s degree, he completed a doctorate in Electric Engineering at the University of Washington in St. Louis, Missouri.

For Dr. Arratia, his mentors during graduate school were essential for him to reach his academic goals. Thus for him it is vital that students in STEM fields heed the counsel and guidance of experienced individuals that have crossed the same path before them.

After finishing his doctorate, Dr. Arratia moved to Puerto Rico, where he joined the faculty at Metropolitan University.  During this time, he realized that Puerto Rico lacked the required infrastructure to develop the scientific potential of young Puerto Ricans interested in these areas of study.  It was then that he had the opportunity to spearhead the Model Institutions for Excellence (MIE) program.

The Model Institutions program began as a joint effort between the National Science Foundation (NSF) and the National Aeronautic and Space Administration (NASA) to increase the workforce in STEM fields.  By 1985, alarming statistics predicted a drastic decrease in the science and technology workforce.  Additional statistics also suggested a marked underrepresentation of Hispanics, Afro- and Native Americans in STEM fields.  As a beginning strategy to change these statistics, the initiative of the Model Institutions was introduced by the President of Morehouse College in Atlanta and then embraced by the NSF.

Puerto Rico is an important diversity input to the STEM workforce, where Hispanics are considered an underrepresented minority.  Metropolitan University competed against universities from all of the United States, and was one of the six institutions selected to implement the MIE program.  From 1995 to 2008 the MIE program provided a total of $2.5 million dollars annually to the selected institutions. 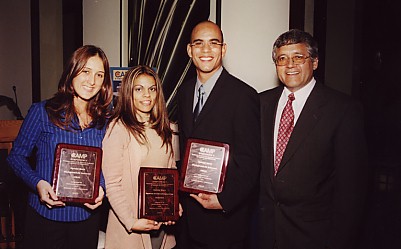 The funds received by Metropolitan University were first used to create bachelor’s academic programs in science and technology.  Although the initiative to increase Puerto Rico’s participation in STEM fields already existed, the university lacked the necessary tools to implement the program.  After the establishment of science laboratories and hiring new specialized faculty, the program began to show its success in 2001 with its first graduating class. Since its introduction, the MIE program generated a total of 233 bachelors in science.  Of these, 136 students continued graduate studies- with 35 that obtained a Master’s degree, 25 that obtained a doctorate and one Law degree.  For example Dr. Fabio Sánchez, currently an assistant professor at Arizona State University, completed the program in 2001 and then went on to obtain a doctorate in Computational Biology from Cornell University.

Due to its success, Ana G. Méndez University System (AGMUS) institutionalized the program in 2008 when the funds provided by the NSF concluded.  Under the leadership of the AGMUS Planning Vice-Presidency and Academic Affairs, while replicating the best practices learned from the project at all sister institutions (Metropolitan University, Del Este University and Turabo University), the Student Research Development Center was created to continue the MIE program with emphasis on student experiences in STEM fields.  The aim of the Saturday Pre-College Experience is to train and retain students interested in STEM fields.  A problem of the current education system (from kindergarten to senior year in high school) is that it is not appropriately training young minds interested in areas of science and technology.  For this reason, the Saturday Pre-College Experience provides the students practical experiences that allow them to learn the process of scientific research at an early age.

During the Saturday Pre-College Experience, high school students take part in research programs directed by a mentor of their own choosing.  Students work on their research projects mostly on Saturdays and the program lasts for 16 weeks.  This experience takes place in different universities throughout Puerto Rico and the U.S. Virgin Islands.  While in the program, students learn the scientific method, to work as part of a team, and acquire essential skills like the design and creation of electronic presentations and posters.  In addition, the experience provides students with current information about the STEM fields.  The Saturday Pre-College Experience also offers its students mentorship, and this is possibly the most important part of the program.  For Dr. Arratia the mentors that he had during his graduate studies were essential in allowing him to reach his academic goals.  For him, in the STEM fields, it is key to have a mentor that serves as a counselor or guide that facilitates reaching the desired goals.

The mentors that participate in the program are in charge of guiding the students through the experience and at the same time counsel the students on how to reach their academic goals.  After finishing this one semester research internship, students present their work in the Pre-college Research Symposium held in twice every year at the end of each semester.

The reception of the Saturday Pre-College Experience experience in Puerto Rico has been excellent.  Since 2010, more than 300 high school students have participated in this phase of the MIE program.  The program is available in all of Puerto Rico and the U.S. Virgin Islands. Its partnerships include the municipalities of Jayuya, Barranquitas, San Germán, Arecibo, Mayagüez, Bayamón, San Juan y Humacao and the Arecibo Observatory. Some students repeat the program up to three times before they graduate high school. 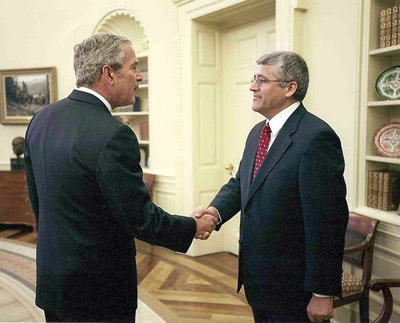 Dr. Arratia highlights the impact the Saturday Pre-College Experience has on its students.  At the beginning of the program students lack the required knowledge to do research. After they finish the program, the students are able understand the scientific method and their specific project to such a degree that they can defend their research similar to a more experienced student.  A proposed result of the program is that students with English deficiencies - the universal language of science - overcome those deficiencies by learning and practicing the language during their research experience.

His dedication to educating future scientists that belong to underrepresented minorities earned Dr. Arratia the Presidential Award for Excellence in Science, Mathematics and Engineering Mentoring (PAESMEM) in 2007.  This award is granted to exceptional mentors that work to increase and retain individual participation in STEM fields.  Dr. Arratia traveled to Washington, D.C. where the then President of the United States, George W. Bush, personally granted the award.

Since 1998, Dr. Arratia has not diminished his efforts to recruit new students to fields in science and technology.  When asked what is it that he enjoys the most from the entire process he answers that “it is watching how the students become excellent at what they do” and that “he can help them make their dreams come true”.  His years of experience as an excellent mentor have taught him that a successful person knows how to accept counsel and has the capacity to focus on a goal. “That is the key to produce a good scientist”- concludes Arratia.

If you are interested in the Metropolitan University, the success record of the MIE program and the Student Research Development Center you can visit the following link: http://srdc.suagm.edu/.

Ana Helvia Quintero: A Borinqueña that has re-invented math education

WHAT IS COVID-19 AND WHY HAS IT RECEIVED SO MUCH ATTENTION?
END_OF_DOCUMENT_TOKEN_TO_BE_REPLACED