There is evidence of scientific curiosity and activity by people in Puerto Rico since its beginnings: in 1581, Juan Ponce de León II made observations on an eclipse to establish more accurately the geographical coordinates of San Juan. Since the sixteenth century prospectors, the engineers and gunners of the fortifications of San Juan, the captains, botanists, cartographers, doctors and surgeons who came to the island, all applied their technical expertise to investigate the physical characteristics of their new country and its inhabitants. So the history of science in Puerto Rico is as long as the history of the country itself.

Unfortunately, we do not have a thorough analysis of this process, and this narrative will suffer certainly from gaps. By "science" I mean here the process of systematic observation and experimentation performed in order to explain material phenomena, in order to further knowledge. The practical application of that knowledge, especially regarding the processing of raw materials, refers to the concept of technology, a parallel story, yet different from science.

Until about 1930, the emphasis of research in Puerto Rico was in agriculture and medicine, because this main industry and the health of the population were the two areas where local attention was necessary.

With botany, ancient science par excellence, Puerto Rico joined the global dialogue of science. Since at least 1785, the Botanical Garden of Madrid had as a correspondent and explorer in Puerto Rico the head of the Royal Botanical, Juan del Castillo, a native of Aragon. In the late eighteenth century, and throughout the nineteenth century, the island was visited by botanists from different countries, who usually worked with local residents typically more interested in the subject.

Although much has been repeated that the first autopsy in Puerto Rico was held in 1814, the fact is that this was a didactic exercise. Already in 1769 the Governor Muesas "did make anatomies" (autopsies) of three soldiers killed in an epidemic, to determine the cause of illness and best treatment. The deaths and relapses, asccording to the coroners, were due to "excesses committed with fruits and drinks." The renewal of Spanish medicine that produced the Colleges of Surgery founded by King Carlos III arrived in Puerto Rico in 1790 in the figure of Francisco Oller. This Catalan doctor and surgeon (grandfather of the painter of the same name) was distinguished by his studies of medical problems in Puerto Rico and his zeal in applying preventive measures against smallpox in Europe (in 1792 inoculation, vaccination in 1803). Throughout the nineteenth century there were other outbreak investigations and autopsy reports, but above all, descriptions of the natural history of the disease, according to the conception of time, affecting the population due to the weather and the land they occupied.

The economic boom produced by the Certificate of Special (1815) was not reflected in the level of education in the country. In the early nineteenth century there were few elementary schools and only two institutions of higher academic level, studies of the Dominican monks and friars, but the military also gave classes to some of the young in San Juan.

The foundation of the Theological Seminary (1832) as an institution of higher education meant (long-term) the introduction of science courses in the curriculum, but only by the fortuitous arrival of the priest Galician Rufo Manuel Fernández (1790-1855), who taught, on his own, the first classes of chemistry and physics in 1834. Two of his first disciples, José Julián Acosta (1825-1891) and Roman Baldorioty de Castro (1822-1889), so renowned in our politics and our lyrics, graduated in Physics and Mathematics in Madrid in 1851. By not having the Island university, secondary education took place in the Seminary and the Economic Society of Friends of the Country, then the chairs for the office of Pharmacy, the Provincial Institute of Secondary Education (since 1882) and the Ateneo de Puerto Rico (with their higher education institution attached to the University of Havana, 1888).

Even under these conditions, researchers still emerged throughout the nineteenth century, for example, doctors Betances, born in 1830, Stahl and Corchado, born about 1840, Del Valle and Gómez Brioso, from the 50s.

Another epidemic, this time from sugarcane, in the second half of the nineteenth century, caused the formation of expert committees and repeated studies. By 1880, Agustín Stahl concluded that there was a "seed" in the field, but the problem was not defined until 1894, when Fernando Lopez Tuero, agronomist at the Agricultural Station Rio Piedras identified the cause in the "white worm" or " caculo "(Phyllophaga).

The first private telegraph line, Morse himself inaugurated from the port of Arroyo to hacienda to Enriqueta (where his son in law lived) in 1859, but the first public line stretched from San Juan to Arecibo in 1869. The first train trip (a steam tram from San Juan to Rio Piedras) was offered in 1880. The Central Highway (San Juan to Ponce), begun in 1841, was not completed until 1888. Before the change of sovereignty (1898) on the island had telephone and electric lighting in some populations. The first car arrived between 1901 and 1904.

The giants of public health research in the early twentieth century were Isaac González Martínez (1871-1954) and Pedro Gutierrez Igaravídez (1871-1935), first in the company of Dr. Bailey K. Ashford (1873-1934) and then independently. Ashford and Gutierrez, among others, generated the momentum for the Anemia Commissions of the first decade of the twentieth century and the Institute of Tropical Medicine in the second. Ashford stimulated the creation of the School of Tropical Medicine, which operated from 1926 to 1949. The three agencies conducted an extraordinary work of clinical, epidemiological and biochemistry in the country. González Martínez, foremost bacteriologist of the island after 1926 became a pioneer in the treatment and prevention of cancer. 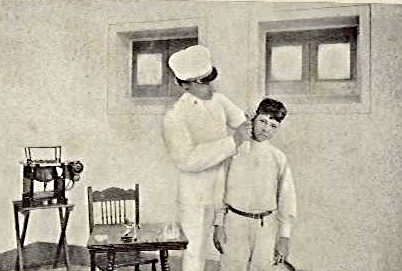 Dr. Ashford with a young patient in 1904

From 1914 to 1924, several U.S. agencies sponsored the Scientific Survey of Porto Rico and the Virgin Islands, which under the direction of Nathaniel L. Britton studied our geology, botany, zoology and ecology. Although in 1902 the government established a chemical laboratory island to investigate legal cases and water quality, and the Faculty of Pharmacy of the UPR was founded in 1913, during the early years of the twentieth century, the sugar industry was the largest employer chemicals for Puerto Ricans. In 1931 he organized the Association of Chemists of Puerto Rico and in May 1941 a law established his College. The Engineering Society was founded in 1904 and compulsory membership (along with architects and surveyors) dates from 1938. In contrast, the Puerto Rico Medical Association was established in 1902 and the final licensing did not occur until 1994.

For those born around 1900, the university was a more affordable option than for previous generations, not only at the University of Puerto Rico (founded in 1903) or the College of Agriculture and Mechanic Arts Mayagüez (1911), but even in the U.S. Among the people trained during this time we can highlight four scientists as an example. Carlos Chardon (1897-1965) won the first great scientific success of this generation by identifying the transmitting agent of a viral disease of sugarcane known as the "mosaic". (The name refers to the yellow spots appear on the leaves of infected plants.) Marta Robert (1890-1986), through her tireless work to educate auxiliary midwives, reduced by 80% tetanus mortality neonatal in four years (1931-1935). Eduardo Garrido Morales (1898-1953) was the first modern epidemiologist of Puerto Rico. For rigorous and original investigations of epidemics, he is considered an innovator in the then emerging epidemiological methods. Ramon M. Suárez (1895-1981) was a prolific clinical researcher whose main contributions were in identifying effective treatment for sprue (published in the prestigious journals Science and Blood), the application of complex methods, such as electrocardiography and radioisotope, to clinical studies, and the identification and definition of clinical best little known in the country, such as rheumatic heart disease.

The product of scientific research on the problems of Puerto Rico, despite being included in the Bibliography Puerto Rican Antonio S. Pedreira (1932) is not reflected in the major socio-historical analysis published in the '30s: Insularismo (1934), the history of Puerto Rico Syllabus of Thomas White (1935) and Problems of Puerto Rican culture of Emilio S. Belaval (1935). By excluding from its analysis of health status of the population and efforts to improve it significantly limited the validity of its interpretation, both as to the causes of the problems and the potential of solving them.

By then there were only three research centers on the island: the University of Puerto Rico (in its College of Arts and Sciences and the Agricultural Experiment Station), the Department of Health and the School of Tropical Medicine. The Second World War, the country's industrialization, the proliferation of universities and federal funds to encourage U.S. research made in the second half of the twentieth century research became an indispensable aspect of educational activities and manufacturing . In the 1940s they founded the Industrial Development Laboratory, in '50s the Nuclear Center, in the '60s began graduate programs in science in the UPR Mayagüez Campus and Río Piedras Campus, the Medical Sciences (RCM-UPR) was established, and in the '70s the functions of the Nuclear Center were reoriented as the Center for Energy and Environmental Studies.

Research in Puerto Rico at the end of the 20th century

In the mid 80s, funded by the National Institutes of Health, in the RCM (and then in other universities) "Minority Biomedical Research Support" and "Research Centers for Minority Institutions" programs were established to provide support for researchers and infrastructure and a little later came funds for AIDS research which have yielded significant results. This phenomenon of quantitative and qualitative explosion has been examined in different ways at civic forums and government reports, but his story has not been written yet. An evaluation of scientific production in Puerto Rico from 1990 to 1998 (which probably reflects the studies carried out from 1985 to 1995) indicates that the production of scientific articles was concentrated in academia (UPR Rio Piedras, Mayaguez and Medical Sciences), and topics of medicine, chemistry, biology and physics, doubling during the study period was higher than that of any other Caribbean country and sixth in Latin America, the articles were published in journals of high visibility and there was a high level of cooperation between authors and local and international institutions.

The research in the first half of the twentieth century made it possible, by changing the economic and political, were met effectively the vital needs of the population, resulting in a dramatic increase in life expectancy that occurred between 1940 and 1950. With regard to research in the second half of this century, are to define its scope, originality, executors, sources of funds, institutional environment and impact on the lives of Puerto Ricans.

Dr. Rigau I enjoyed reading your article which I hope will turn into a book. I would like for you to please consider adding Ana Roque de Duprey in your section of "Education and Research". Ana Roque de DUprey (1853-1933) was among other professions a professor of mathematics, Latin and French. She was an honorary member of Paris Society of Astronomers. She was also founder of te Liceo de Ponce and el Colegio de Mayaguez. I don't know of anyone who has written a book on the topic you chose so do continue with research and write this book.

WHAT IS COVID-19 AND WHY HAS IT RECEIVED SO MUCH ATTENTION?
END_OF_DOCUMENT_TOKEN_TO_BE_REPLACED