PDF version
Odmara Barreto, MD-PhD
Borinqueña emphasizes the contribution of Puerto Rican and Hispanic women in science and technology and provides a space to discuss topics of interest about the empowerment of women. In “I am Borinqueña” we will be interviewing women scientists that are role models for future generations. Learn about their stories and paths to success. Use #borinqueña to spread the word.

Odmara Barreto, is a medical doctor, a scientist, a Puerto Rican, a mother of two, an incredibly talented woman who has completed her MD-PhD. Odmara, originally from Canóvanas, Puerto Rico, attended Public School in Carolina and Canóvanas where she developed a clear interest in Math and Science. Her high school teachers were crucial in encouraging her to follow her dream of higher education and nourishing her dream of pursuing a career in Science.

As a freshman in college she started in the Biology Department at the University of Puerto Rico in Rio Piedras and she was enrolled in the pre-MARC program funded by National Institute of Health (NIH). Her first experience as an undergraduate researcher was with professor Gladys Escalona at the Neurobiology Institute in San Juan, PR. While Odmara was originally interested in Marine Biology, her immersion in research allowed her to discover many more fields within Biology. During her first summer of college she worked as a research assistant in Neurobiology at Stanford. The second year of college she transferred to the Mayaguez Campus, where she was accepted at the Minority Access to Research Careers (MARC) program. Her participation in the summer research opportunities amplified her vision of the future and inspired her to dream higher. 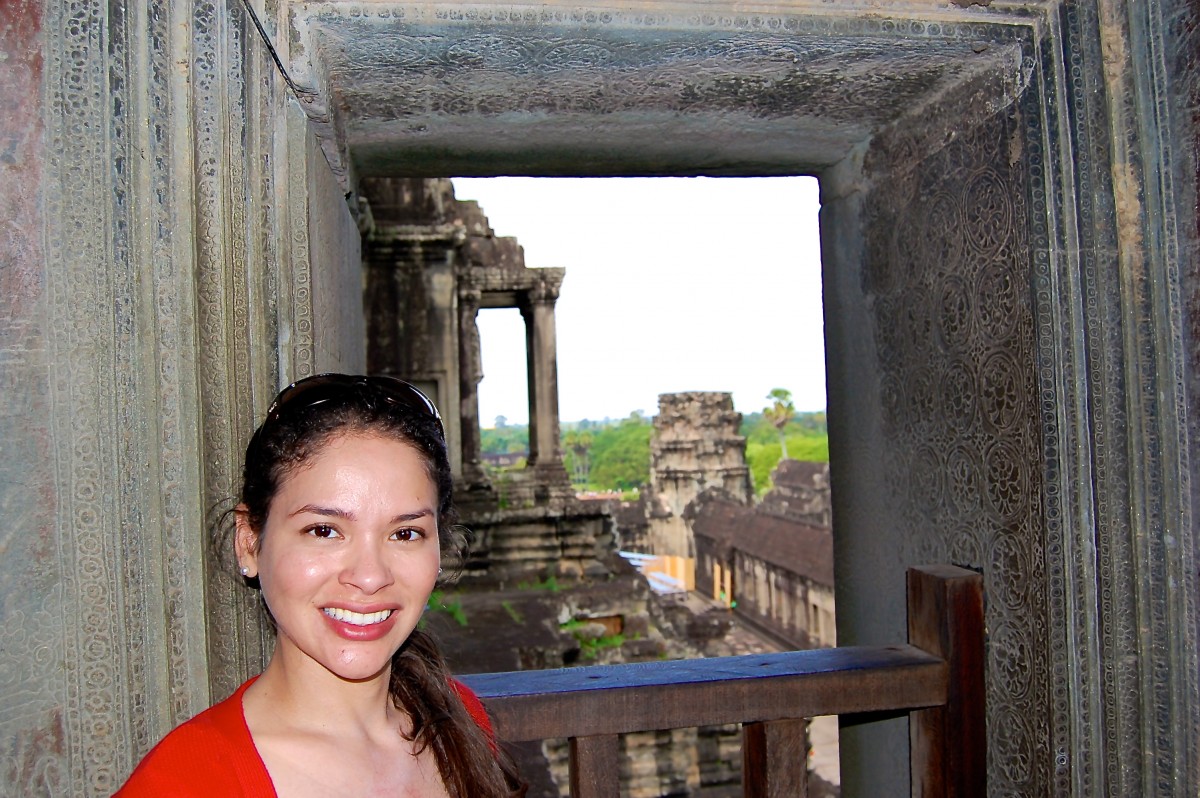 The following summers she completed research programs at the University of California in Berkeley and Harvard University. At the time of graduation her certainty of pursuing a graduate degree was high and she was offered to complete her last research project at Harvard, contracted for one year. During that year in Boston, she completed her graduate school applications for the MD-PhD. Then, she decided to start the MD PhD at Brown University, and during her first year school she was awarded the prestigious NIH Graduate Student Fellowship (NRSA) for students. She then transferred to Stanford to continue her MD-PhD studies, which she completed in 2012. Since then she finished one year of internship in Surgery at Stanford and she is now completing her residency in Anesthesia at the University of California in San Francisco. Odmara is author of several publications about her research in neurobiology as a graduate student, but also as a medical researcher. 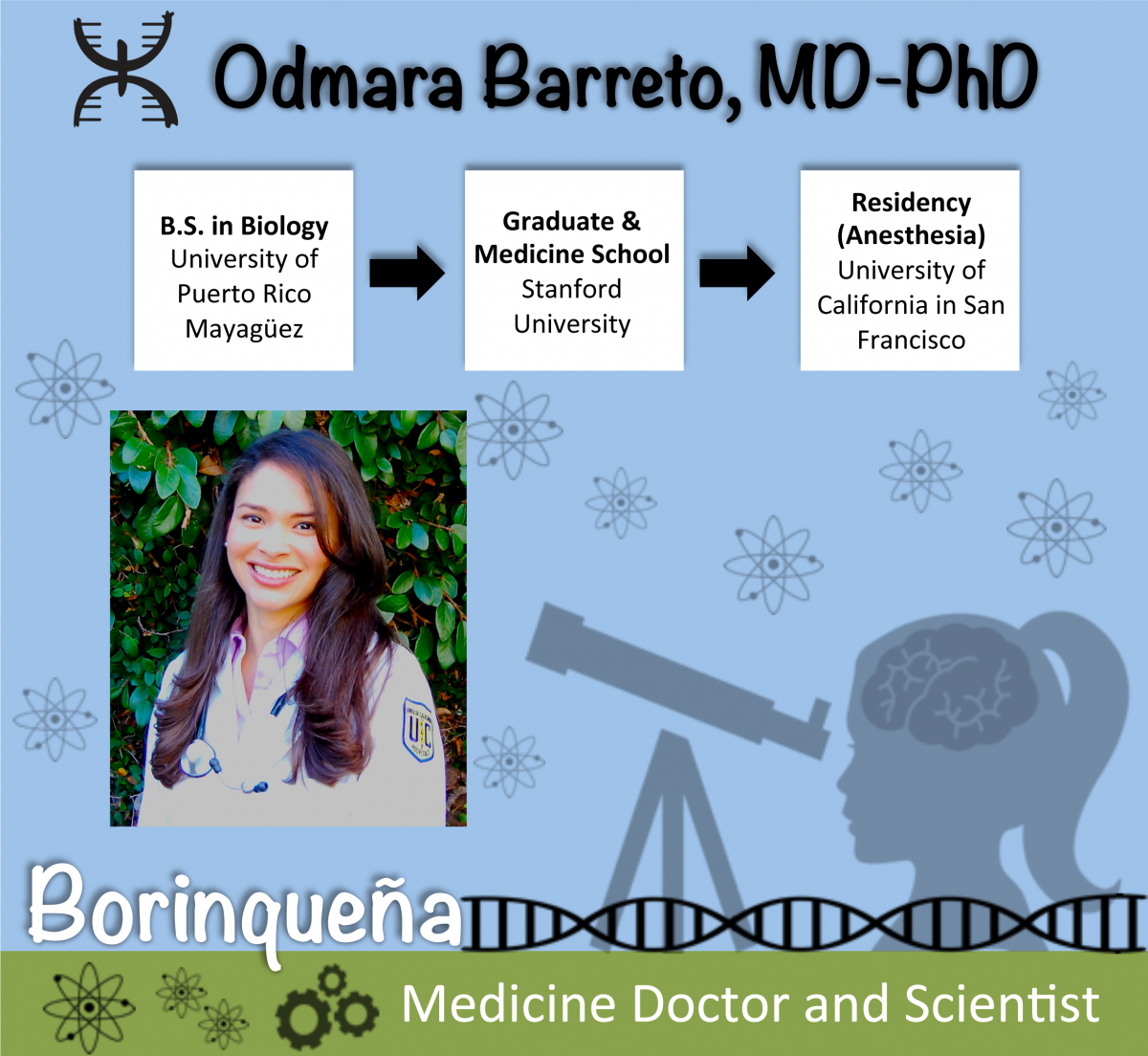 There are many facts in Odmara’s life that are not typically mentioned in her professional profile, like the fact that she is the proud mother of two girls, or, the fact that she was the first in her family to complete college and that she is the product of the public education system in Puerto Rico. Her major fear was dealing with the language barriers, which resonates with so many highly talented students in the island. She attributes her success to her hard work and perseverance, her humble attitude not allowing her to take any credit for her smarts. To students in middle school, high school and college today she says: “You need to find within yourself your passions and determine what you will do with your life, how you will contribute to society; then you can build your dreams”.

As I talked to Odmara, I saw a reflection of myself and I remembered how terrified I was of speaking English my first summer as an undergraduate researcher. I also remembered how marvelous it was to discover that if I wanted to pursue graduate school, I could, that it was free and that the graduate program would offer scholarships and even a stipend. More than fifteen years later after the first summer research program, Odmara believes that those opportunities were transformational to her, opening a window with access to outstanding scientists, doctors and researchers who have accomplished unforeseeable goals. What Odmara does not know is that, today, she is one of them.

Researchers to Study Drivers of Asthma in Puerto Rico

WHAT IS COVID-19 AND WHY HAS IT RECEIVED SO MUCH ATTENTION?
END_OF_DOCUMENT_TOKEN_TO_BE_REPLACED