Some will feel the like their chest is going to pop out because someone has told them that they have a “liver of steel” during their career as professional drinkers. What you haven’t been told is that the origin of this saying is because the liver hardens and loses its function for those who abuse alcohol.  Because we only have one liver, once you damage it, there’s no plan B, YOU lost the game. It’s not like the kidneys which if you remove one, there’s still another one and you can receive dialysis to ameliorate the symptoms.  But many people take the comment a joke. Now I’ll explain what happens to your liver every time you go drinking and abuse alcohol.

When you drink that shot of “pitorro” during Christmas’ Eve, with the purpose of “assisting digestion”, from the moment it passes through your tongue and that “heat” in your throat, alcohol begins to be absorbed.  Up to 5% of the alcohol in that drink is absorbed and metabolized in the mouth, tongue, esophagus, and stomach. The rest goes to your circulatory system. The lungs and kidneys get rid of 2-10% of this alcohol in the blood. The rest is metabolized by the liver.

How does this happen?

When ethanol (the alcohol contained in the alcoholic beverages we consume) comes through the circulatory system to the liver, an enzyme that converts alcohol to acetaldehyde is activated in the liver cells.  Acetaldehyde is highly toxic, so immediately another enzyme converts the acetaldehyde into acetate, which is used in other metabolic processes within the cell without causing further damage.

However, every time we drink too much, liver cells gradually lose their ability to metabolize not only the alcohol but also the acetaldehyde which is what puts our health in peril.  This compound then is hanging out in the cell, in the same way that we keep “hanging out” at the bar, and when we can not get rid of it, acetaldehyde can interact with proteins and even the DNA of the cell causing irreversible damage.

When cells realize this, they get hysterical, they don’t know what to do and decide to die. This process is called programmed cell death or apoptosis.  Once the cell realizes that it can not recover from the damage, rather than trying to replicate itself and perhaps contribute to a mutation in future generations of cells, it decides to halt the damage at that point to save us. But when these cells die, they leave a scar that can only be partially regenerated when new tissue forms, depending on their drinking habits, leading to a decrease in liver function. Repeat this process 3-5 times a week for years and years and your liver will become a giant scar that may not be able to function.

And there are other ways that excessive alcohol intake affects the liver. One of the byproducts of the metabolism of ethanol, NADH, influences the metabolism of fatty acids in the liver. Ethanol stimulates noradrenaline release which in turn accelerates the metabolism of triglycerides in fatty tissue (cells that accumulate different fats) generating fatty acids. They travel to the liver to continue being metabolized. If you haven’t noticed, the liver is in charge of most of our metabolic processes and how the substances we eat, good and not so good, are processed and simplified to meet the needs of our system.

The more alcohol consumed, te more fatty acids that get to your liver. Where is the problem? Well, this byproduct of the metabolism of ethanol (NADH) inhibits the metabolism of fatty acids in liver cells. Therefore, liver cells end up with an excess of fatty acids which they can’t get rid of and the liver ends up covered with fatty tissue that serves no purpose. Thus, the liver loses its functionality. This is the first stage of alcoholic liver disease and is known as fatty liver.

When the liver no longer works due to chronic consumption of alcohol, that’s when you’ve developed cirrhosis, or hardening of the liver, accompanied by loss of liver function. Do you remember the “liver of steel”? This is what it refers to.  Those who drink heavily and chronically do not have a liver of steel. However, they will eventually develop one and when they reach this point the only option is a liver transplant which is complicated, expensive, and risky. 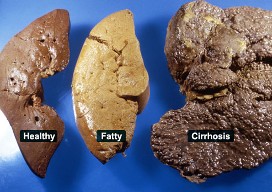 But there is light at the end of the tunnel. For starters, the development of fatty liver is reversible. It has been proven that if you stop drinking alcohol for 2 weeks, the liver will regenerate most of the tissue that was affected, recovering part of its function. If you choose to continue drinking after those two weeks, you should do so in moderation, according to the guidelines for alcohol consumption discussed in the previous article.  In addition, making changes in diet and taking supplements such as B complex, folic acid and methionine, among others, may help the liver recover from the injuries we cause to it every time we go out drinking.

Always check with your doctor before taking any medication or supplement, no matter how natural it supposedly is.  Metabolic processes are complicated and a healthcare practitioner is the only one who can advise on the interactions that these supplements can have with other health conditions you may be affected by.

Let’s go! The first step is the hardest, but if  you never take it, you’ll end up with a real liver of steel, and this time it won’t be a joke. To your health! #porunPuertoRicosaludable.

How does alcohol affect your brain?

One more beer and then we go...

WHAT IS COVID-19 AND WHY HAS IT RECEIVED SO MUCH ATTENTION?
END_OF_DOCUMENT_TOKEN_TO_BE_REPLACED