Borinqueña emphasizes the contribution of Puerto Rican and Hispanic women in science and technology and provides a space to discuss topics of interest about the empowerment of women.  In ‘What’s up Borinqueña?’ we share a variety of experiences and perspectives from different women and men that are committed to advancing equality for women in science.

Read this blog in Español here.

“Don’t worry.  You will get in.  You are a double minority.”

The first time I heard this, I was flabbergasted.  I was applying for doctoral programs in Neuroscience, and according to multiple people around me, I would get accepted anywhere because I am a Latina woman.  I was told that programs and institutions had a quota of minority recruits they had to meet.  My talent and ability were—apparently—not as important.

Being a woman in science can sometimes be isolating.  Around the world, women are outnumbered by men in Science, Technology, Engineering and Mathematics (STEM).  In the United States women earn just a quarter of all STEM degrees and represent 28% of the workforce in these fields.  If you are a woman of color, you are even more alone.  In 2011, women of color (black, Hispanic/Latina, Asian American or Pacific Islander, and American Indian/Alaska Native) earned 12% of bachelor’s, 10% of master’s and 9% of doctoral degrees in STEM in the U.S.  Currently we account for just 5% of the STEM workforce.

Recently, there has been a lot of talk about the lack of women in STEM.  You have probably seen the headlines.  You have read the statistics (at least a few of them, above).  You may have experienced it first hand.

How do we begin to tackle these issues?  What can we do as individuals, communities and institutions to help build a more supportive climate for women in science?  How do we move towards action?

Recently at the University of Washington in Seattle, I co-organized an open forum to discuss the challenges faced by women in science, particularly at the intersection of race, gender and culture.  A group of women and, yes, a few men got together to talk about the numbers, the issues, but more importantly, about how we can—individually and collectively—take action towards change.

Dr. Sheila Edwards Lange,, offered her perspective on the challenges faced by women in science at the intersection of identity and culture. Edwards Lange spoke about coming of age during the height of the Women’s Liberation and Civil Rights movements.  As an African American woman interested in both gender equality and African American community empowerment, she was challenged to choose between “the black cause [and]… those women, meaning white women.”

After a brief presentation on the statistics and the challenges faced by women in science, attendees broke out into small groups for a discussion.  Each group came up with at least one actionable recommendation that could be individually or collectively implemented to promote the advancement of women in science.  As our discussion progressed, common threads became apparent. 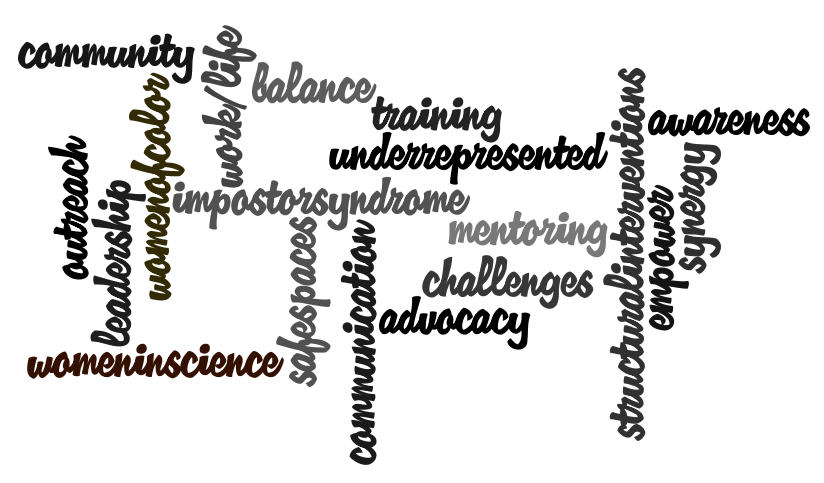 As Dr. Angela Ginorio, Associate Professor of Gender, Women & Sexuality Studies at the University of Washington, Seattle, pointed out to conclude our discussion, the task of promoting equality for women in STEM may seem daunting.  Although progress has been made, inequality remains.  The underrepresentation of women, particularly women of color, in science remains an issue that needs to be addressed by all of us.  Working towards solutions demands acknowledging the challenges and having difficult conversations about the challenges ahead.  However, we must not just talk the talk. We must walk the walk and commit to action.  Would you join us?

WHAT IS COVID-19 AND WHY HAS IT RECEIVED SO MUCH ATTENTION?
END_OF_DOCUMENT_TOKEN_TO_BE_REPLACED