‘I am the girl that tweeted you’.

Elena found me on Twitter.  “I need your help,” she wrote.  I gave her my email.

Elena is an 8th grade student in Puerto Rico and her teacher had assigned students to profile a Puerto Rican scientist for a special project.  “You,” she wrote, “are my scientist.”

“I'm asking for your help because there isn't that many information about you on the web,” she said in her email.  I blog.  I tweet.  I take a lot of pride in being a role model and a mentor (SPA) to younger scientists.  I do my best to make science—and myself—accessible.  Thus, I was taken aback by Elena’s message.  What did she mean there wasn’t enough information about me? 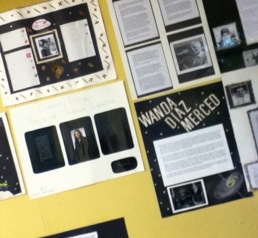 Students created posters profiling Puerto Rican scientists. Many of these scientists have been featured by Ciencia Puerto Rico in the past.

Young people’s perception of scientists and their ability to envision a successful scientific future depends on their access to diverse representations of scientists.  Yet most students have never met a scientist or have a stereotyped perception of what scientists look like and do.

Sixty-five percent of people between 18-29 years of age obtain their information from the Internet.  Close to 73% of people in between ages 12-30 have at least one account on social networks such as Facebook and Twitter. Our society’s prospective scientists learn, connect, communicate, and basically live on the Internet.  And if we, current scientists, don’t meet them where they are, we are losing a precious opportunity.

If you are an underrepresented scientist, it is even more important that you are visible to youth in your country or community of origin.  Underrepresented minority youth have less access to role models, mentors and opportunities.  However, they are more likely to use certain social media platforms, making these networks are prime place for outreach.

So fellow scientists, go online.  Be “social”.  Break stereotypes.  Share your work.  Share your insights and passions.  Share your story and your struggles.  Don’t be afraid to be visible.  You never know whose “scientist” you will be.

WHAT IS COVID-19 AND WHY HAS IT RECEIVED SO MUCH ATTENTION?
END_OF_DOCUMENT_TOKEN_TO_BE_REPLACED