Access to science opportunities—to the privilege and power of science—is not equitable nor equal. This was my truth—and that of many people I know—growing up. I didn't have much access to role models, to programs, to information. I didn't know I could be a scientist. Once I became a scientist I made it my mission to leverage my knowledge and privilege to make science accessible to people like me.

Over the past nine years, I have been using science communication to empower scientists and communities that are traditionally excluded from the process of science. For almost a decade, I have been helping scientists, through one-on-one coaching and most recently by offering workshops (including the two below at SACNAS 2015), become better communicators by exercising the public communication of science, predominantly to minority communities.

I firmly believe that effective communication skills are critical for the advancement of science and the careers of scientists. For scientists from underrepresented backgrounds, these skills cannot only help them advance their careers and increase their visibility, but also empower their communities. Ultimately, my goal is that by building their communication skills, minority scientists cannot just add a diversity of perspectives to the way science is shared and done, but help bridge the pervasive cultural gap between science and minorities. My vision is that by helping scientists from underrepresented backgrounds become more effective communicators they can lift their communities as they climb to create a more just and equitable world. 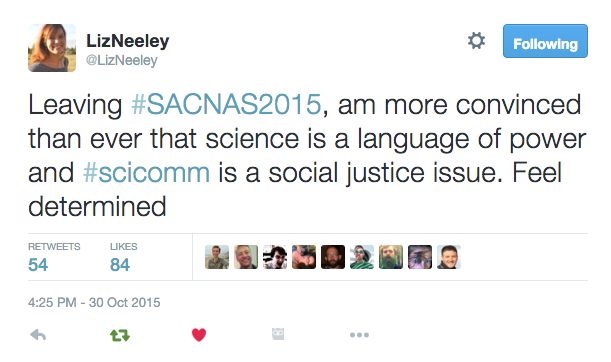 My favorite #SACNAS2015 tweet (and probably one of my favorite ones, ever). Thank you, Liz.

From the #SACNAS2015 sessions:

Last week, at the SACNAS National Conference, I had the honor of (once again) leading professional development sessions to help scientists from underrepresented backgrounds build their communication skills. Huge thanks to my colleagues and friends Dr. Yaihara Fortis-Santiago, Ms. Liz Neeley and Dr. Amy Vashlishan-Murray who co-chaired and co-presented these sessions about social media for personal branding and career advancement and effective communication skills. Also thank you to Dr. Danielle Lee for her support and inspiration. Below you will find the slides from our two science communication sessions, as well as tweets and additional resources.

Our sessions, in tweets:

Passion for education and the extended family of CienciaPR

WHAT IS COVID-19 AND WHY HAS IT RECEIVED SO MUCH ATTENTION?
END_OF_DOCUMENT_TOKEN_TO_BE_REPLACED