PDF version
Dr. Eddie Laboy Nieves has dedicated his life to studying and educating others about Puerto Rican nature

As a restless and hardworking child, the words spoken by “grandpa” Don Andrés became Eddie’s life compass: “We need to take care of the land and the rivers; without them the poor cannot eat or drink.” Inspired by this message of love for nature, Dr. Eddie N. Laboy Nieves recognized the importance of preserving the environment, leading him to invest his time and career to understand it and to teach others about nature.

His beginnings in science

Dr. Laboy Nieves became interested in the sciences as a young boy, growing in Barrio Marín, an impoverished sector of Patillas. With his natural environment as "scientific laboratory" and his little friends as "research colleagues," Laboy Nieves grew up discovering that he did not have to go too far to get close to science: “We went into the hills to explore, to climb trees, to eat stinkingtoes (algarrobas; Hymenaea courbaril), mangoes (genus Mangifera), soursops (guanábanas; Annona muricata), and to hunt finches. We fished river shrimp and crabs (buruquena; Epilobocera sinuatifrons) for dinner.”

“Since childhood, everyday things structured my critical thinking; things like playing with a spintop, making cars and “telephones” out of tin cans, flying paper airplanes, seeing how a tadpole changed into a frog, starting a cooking fire, thinking about why coquí frogs (coquíes; Eleutherodactylus portoricensis) did not sing during the day, or how fireflies (cucubanos; Lampyridae family) illuminated the rural nights.” 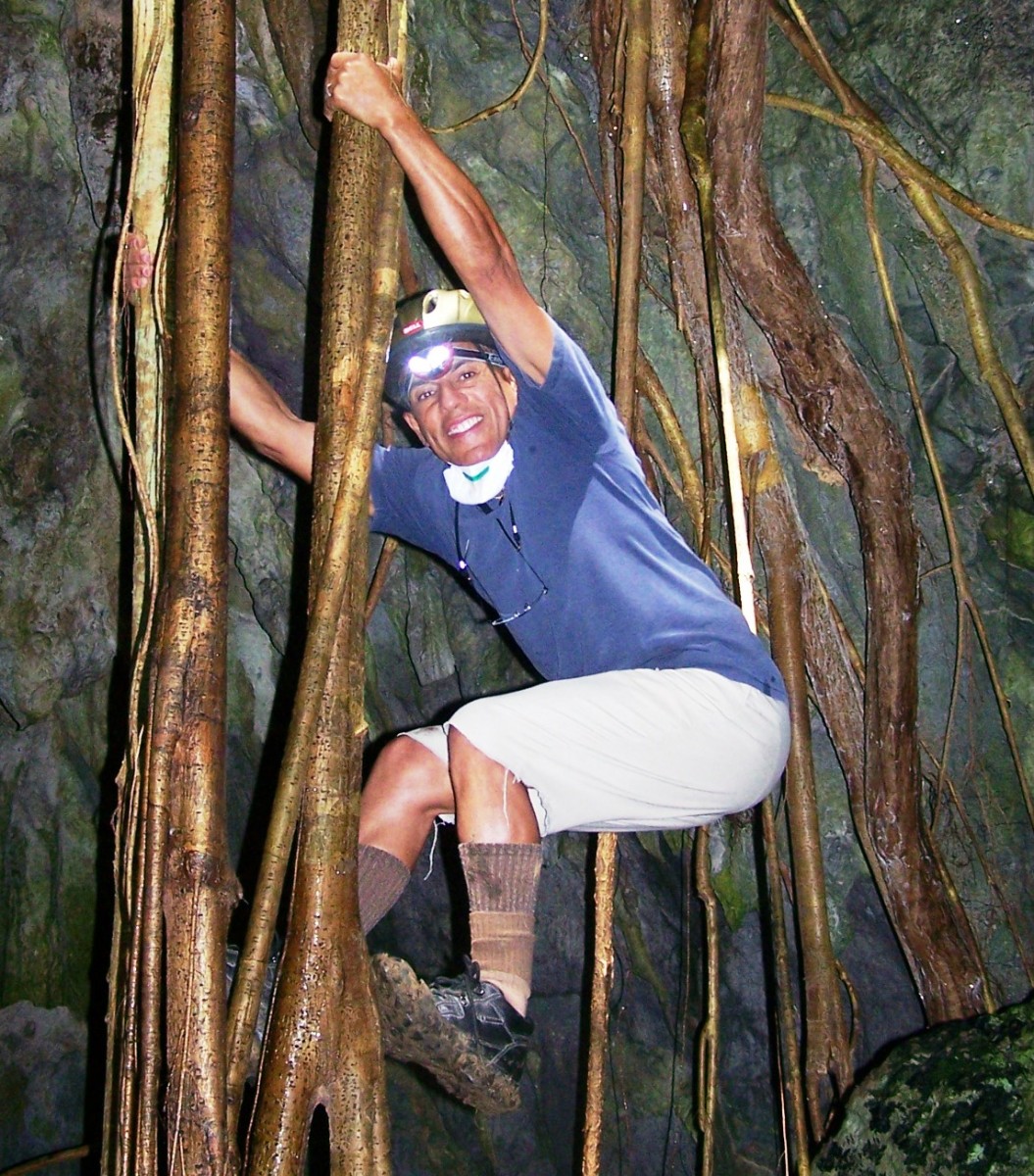 In the third grade Dr. Laboy Nieves stumbled upon a magnifying glass, his first scientific research instrument. That simple lens focused his way of observing his surroundings and transformed him into an even more curious and inquisitive student. “Playing with this lens, and writing and drawing my observations were events that started to transform me from just a boy to a full-fledged scientist.”

Another life experience that shaped Dr. Laboy Nieves was to talk to his elders, especially about plants, animals and the environment. Don Andrés, his grandfather, farmed tobacco, bananas, pigeon peas, corn, and other crops. A young Eddie had the task of bringing lunch to his grandfather. As he walked through the fields, he observed his surroundings and listened to Don Andrés’ thoughts and ideas about the relationships between people and their land.

“During our conversations, my grandpa taught me to identify by name many of the singing birds of the area. I also learned the names and smells of the bushes with leaves that could be used for teas; the name of the edible plants, fruits and vegetables; how to use the Moon as a guide for when to plant and when to harvest; and why it is important to prepare the land using rows.”

Unlike Don Andrés, Dr. Laboy Nieves’ parents did not work in agriculture. His mom was a housewife and his father worked as a shelf-stocker at a small grocery store.  Despite their humble origin, both parents supported Dr. Laboy Nieves’ scientific ambitions, showing him the value of hard work, of saving, of sharing, and of getting a good education. At one point they saved some money and were able to buy a set of encyclopedias. Dr. Laboy Nieves described this gift as “a collection that brought a world of knowledge to the house, one that I consumed and cherished well into my college years.”d for teas; the name of the edible plants, fruits and vegetables; how to use the Moon as a guide for when to plant and when to harvest; and why it is important to prepare the land using rows.”

Although Dr. Laboy Nieves grew in a poor neighborhood, his effort, intelligence and passion for nature motivated him in 1975 to attend a newly created bachelor’s degree in Environmental Management at University of Puerto Rico, Río Piedras Campus. This experience impacted him profoundly. He started to notice that the world’s social and technological progress was negatively affecting the environment, and that overpopulation and over-commercialization exploited natural resources without regard for consequences. He realized that as a society, we should develop guidelines, personal behaviors and collective actions to harmonize humanity’s relationship with nature.

His years at the University of Puerto Rico were full of learning experiences that helped him grow as a person and as a scientist. One day he needed to redo a chemistry experiment. Wanting to finish as soon as possible, Dr. Laboy Nieves fudged titration data so that it would look perfect. The instructor confronted his “perfect” data with the fact that she had given him water instead of phenolphthalein. He was deeply ashamed but it was a great learning lesson! At the UPR, Dr. Laboy Nieves found that he had a vocation as a field scientist and did not enjoy working in the laboratory.

In 1979, after finishing his undergraduate degree, Dr. Laboy Nieves received a scholarship from the Puerto Rico Department of Natural Resources to study in the United States. He moved to the Appalachian region of Maryland to complete a master’s degree in Wildlife Management at the University of Frostburg. This was a huge step for Dr. Laboy Nieves because he had to abandon his nation and his family to reach new horizons in a cold environment, both geographically and socially.

Dr. Laboy Nieves knew “textbook English” but not about idioms like “hit the road” or “what’s up”. This resulted in a lot of teasing from his peers. He even experienced racial discrimination. At the time, a group of Iranians kidnapped a United States airplane. Dr. Laboy Nieves had facial features that looked Persian, so he was bullied, asked to leave Frostburg. Despite these and other negative experiences, Dr. Laboy Nieves completed his degree. His masters’ thesis allowed him to return to Puerto Rico, where he quantitatively studied habitat selection in red-tailed hawks (guaraguaos; Buteo jamaicensis). Of course, he was already familiar with these majestic birds thanks to Don Andrés’ tales of their uncanny ability to catch rodents harmful to his crops.

Working to study and educate others about nature

Back in Puerto Rico, Dr. Laboy Nieves worked for five years as the administrator for the Jobos Bay National Estuarine Research Reserve System. This position allowed him to apply what he learned in college and realized that there was a gap between the utopian ideas of environmental preservation and the realities of working with a limited budget and lacking real power to develop and fully implement management programs, especially when partisan politics interfered with sound science. The combination of partisan politics and bad policy decisions from the Puerto Rico Department of Natural Resources threatened to affect his personal and professional reputation, so Dr. Laboy Nieves had to quit what he thought was his dream job as a Wildlife Management Officer. What appeared to be a professional setback, led to even more rewarding professional opportunities. 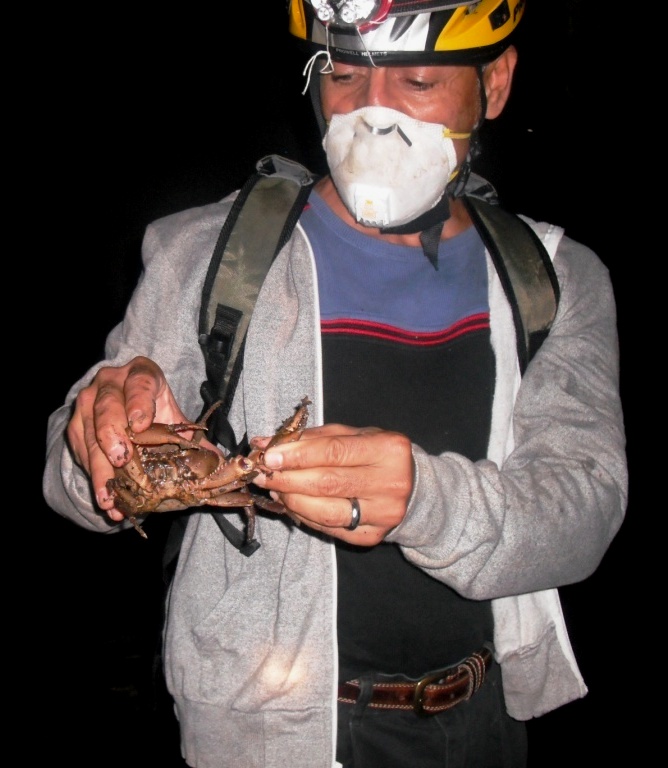 In 1987, Dr. Laboy Nieves was selected as the first Head of the Natural Sciences Department at Interamerican University, Guayama campus. His knowledge of higher education administration was limited, but he surrounded himself with supportive mentors. At this institution, Dr. Laboy Nieves observed how private colleges must struggle to recruit and retain students, stay financially afloat, and strive for academic excellence. It was at Interamerican University that he received two important research grants, one from the National Science Foundation (to improve research infrastructure and equipment) and another from the Environmental Protection Agency (to develop and implement environmental education activities).

With assistance from Interamerican University, in 1994 Dr. Laboy Nieves received a sabbatical and a scholarship to complete a doctorate. He had plenty of North American universities to choose from; however he decided to attend the Ecology Center at the Venezuelan Institute for Scientific Research (IVIC). Dr. Laboy Nieves cited many reasons why IVIC was the best choice for him: “IVIC is the ‘MIT’ of South America in terms of publications, research, physical infrastructure and patent development; Venezuela was close to Puerto Rico, both geographically and culturally; tuition was relatively inexpensive; and the Ph.D. at IVIC was commensurate with similar programs in the United States.”  In his doctoral dissertation, Dr. Laboy Nieves researched the environmental factors that limit the habitat distribution and abundance of sea cucumbers (class Holothuroidea).

Currently Dr. Laboy Nieves works as a Professor of Environmental Sciences, Faculty of Natural Sciences and Technology, Turabo University. Since August 2013, Dr. Laboy Nieves is the Director of the Graduate Program in Environmental Sciences, a position that allows him to help educate the future generations of environmental scientists who will study and research environmental preservation in Puerto Rico and the Caribbean Region. In addition, he is the President of the International Center for Environmental Studies and Sustainable Development (CIEMADeS), an organization created to promote cooperation in advancing the sustainability agenda within the Caribbean Region.

At Turabo University Dr. Laboy Nieves found what he described as his “niche”. He believes that Turabo has a programmatic commitment to excellence; a first-rate physical infrastructure; incentives to promote scientific research, publishing, the internationalization of Puerto Rican Science; and a commitment to protect the environment. Dr. Laboy Nieves is the principal investigator for the Puerto Rican Wildlife Video Library, a project in which endemic species of animals are filmed and described in their natural habitat. These videos are posted online and can be used as resources for environmental education.

His advice to future scientists

After three decades as a scientist, Dr. Laboy Nieves has completed more than 35 publications related to environmental issues. He recognized that his success was directly linked to the many mentors who helped him, among them Dr. Gustavo Candelas, Dr. Pío Rechanni, Dr. Ariel Lugo, Dra. Álida Ortiz, Dr. James Mosher, and Dr. Jesús Eloy Conde.

Reflecting on what advice he would give to college science majors and early-career scientists, Dr. Laboy Nieves stated: “You need to study something that you are passionate about and you will never be unmotivated to wake up and go to work. A low socioeconomic status should NEVER be an obstacle for a gifted student to pursue his dreams as a scientist. You need to take advantage of all the opportunities that come your way to improve yourself both personally and professionally. Some of those opportunities might never return, or others might snatch them up before you.”

“It is OK to make mistakes, but you need to learn from them; all experiences make us better and more mature human beings. Sometimes the biggest hurdle is our own fear of the unknown or to be adventurous. That’s when we need to overcome our doubts and open ourselves to new perspectives and personalities. They will help us trace our professional route and will allow us to achieve new goals.”

If you want to know more about Dr. Laboy Nieves and his long career as a defender of the environment, you can read his profile at Ciencia Puerto Rico (www.cienciapr.org).

WHAT IS COVID-19 AND WHY HAS IT RECEIVED SO MUCH ATTENTION?
END_OF_DOCUMENT_TOKEN_TO_BE_REPLACED