PDF version
Dr. Wanda Díaz Merced has created a system that lets her "listen" to the stars (Credit: William Leibman)

Frequently, science teachers ask their students to draw a scientist so that they can get a sense of what students think and imagine about scientists. Thousands and thousands of drawings show the same stereotypical characteristics: a male scientist, white, dressed in a lab coat, usually a chemist mixing liquids and generating explosions, and a person that does not have any physical limitations.

No student has ever drawn a scientist like Dr. Wanda Díaz Merced.  This young woman from Gurabo embodies the scientific anti-stereotype. Not only is she a woman and Puerto Rican, but also she completed her doctoral work in astrophysics, and without being able to use her sight.

Wanda went to Matías González García Middle School and Dra. Conchita Cuevas High School in Gurabo. At that age, she already considered science to be fascinating: “I wanted to be a scientist since I was a little girl. I always did science fair projects and I used to mix things at home (something I don’t recommend to young people now),” she says with a laugh.

Her parents have always supported her. “My parents would have supported me even if I told them I wanted to earn a living decorating clouds.  I am very proud that I don’t come from an economically privileged family. My little sister has a severe physical impediment and sometimes we did not have what to eat at home. My parents gave me the example of humility and hard work. That example instilled in me the power of understanding when others are suffering and how to help them in some way”.

Once she started college at the University of Puerto Rico (UPR) at Río Piedras, Dr. Díaz Merced broadened her perspective about science. At the same time, she asked herself questions about physics and astronomy that went beyond what the books said. “I started college in the General Program for Natural Sciences, but it was my impression that there was something else behind the explanations in science books, like a rich subtext that was not explained. I imagined it was something at the level of the nucleus, of interacting forces and fields, which were ideas that I started to study in more detail.

Wanda’s interest of increasing her knowledge was not only motivated by personal curiosity, but also because she predicted that she would have to explain those concepts once she reached her goal of becoming a scientist: “ I was very interested [in that topic] because one of my goals has always been to be a good mentor of future professionals. To succeed in my goal of training capable scientists I had to know how to explain science well and with conviction. For this reason, I fell in love with physics and mathematics even more.” While in college, a health issue robbed Dr. Díaz Merced of her sight. This event, along with losing her job as an undergraduate research assistant, did not deter her, but instead motivated her even more to attain her professional goals. “My determination is stronger than any setback or obstacle. At that time there was no way that a blind person could do science, let alone space science at the doctoral level. I had the honor of being in the necessity of finding the means to work as an astrophysicist.” 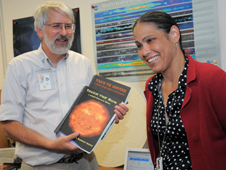 After finishing her bachelor’s degree, and while obtaining her Master’s degree in Physics at the University of Puerto Rico Río Piedras campus, Dr. Díaz Merced completed multiple research internships at the Heliophysics Laboratory at NASA’s Goddard Space Flight Center. Between 2006 and 2010, Wanda helped to develop a series of analytical techniques in the field of sonification.

Sonification is the science of translating numerical data into sound signals, in a manner similar to how notes on a music score are translated into music. An advantage of sonification is that, through hearing, it allows the detection of ambiguous gradients or subtle changes in numerical patterns in data that cannot be easily detected by traditional techniques. It is analogous to a symphony conductor that can detect among the multiple musicians if a single one of them is not playing the correct notes.

This novel technique of sonifying astrophysical data has allowed Dr. Díaz Merced to study phenomena like gamma and x-ray electromagnetic wave emissions produced by stars that are violently changing, and the production of plasma particles in the surface and corona of the Sun. Wanda’s professional contribution is even greater, since her expertise in computer science allowed her to program computer systems created specifically for sonification applications. X-Sonify is an example of one of her sonification programs.

Recently, Dr. Díaz Merced completed her doctoral studies, with a specialty in computer science, at the prestigious University of Glasgow in Scotland. At the same time, between 2010 and 2012, Wanda worked with the Harvard-Smithsonian Center for Astrophysics to design paradigms associated with person-computer interactions. In addition, she experimented with the use of sonification and C++, Matlab, Octave, Java, DVK and Eclipse software to complement visual analysis for astrophysical data. The results of her scientific endeavors have been published in journals like Sun and Geophysics, Bulletin of the American Astronomical Society, and Proceedings of the International Astronomical Union.

This year Dr. Díaz Merced returned to the Heliophysics Laboratory at NASA’s Goddard Space Flight Center where she worked with a protocol called General Mission Analysis Tool, that studies the trajectories of missions that are orbiting or will orbit the Earth in the future. While at the Heliophysics Laboratory, Wanda studied the necessary trajectories and determined effective ways to determine risk in probabilistic terms. Wanda also collaborates with the University of Glasgow and the Harvard-Smithsonian Center for Astrophysics, where she studies new applications to the use of sound as a complement to the visual field to analyze stellar plasmas.

Listen to some of Wanda's astronomical data, converted to synthetic music with Xsonify

Wanda told us that, even though her scientific studies have not been easy, she has had the support of several mentors. These individuals established with Wanda a non-hierarchical relationship where the mentor and disciple worked together to obtain a common goal. Among Dr. Díaz Merced’s mentors are Daisaku Ikeda, Josei Toda, John Mannone, Robert Candey and his wife Amy Hansen.

When asked what advice she would give to those students interested in studying science, Dr. Díaz Merced answered: “I would tell them not to give up. If the experiment does not work or if you don’t do well on a test, keep repeating it until it works and you succeed. I would tell them the words of Daisaku Ikeda: ‘Life is a marathon, as is faith, and even if we lose the advantage in the middle of the race, victory or defeat are decided at the finish line’.”

To know more about Dr. Wanda Díaz Merced and her work in the field of sonification of astrophysical data visit her profile at Ciencia Puerto Rico.

Marcel Agüeros: The junction of world-class astronomy and passion for diversity

WHAT IS COVID-19 AND WHY HAS IT RECEIVED SO MUCH ATTENTION?
END_OF_DOCUMENT_TOKEN_TO_BE_REPLACED