A well-known mathematics postulate states that: “Through any two points, there is exactly one straight line." Our reality, of course, is much more complicated than that. The life journey of a person is more like the curvy roads of PR-1, or “La Piquiña.”

A perfect example of this is scientist James Ayala González, who started his professional life as a jazz musician and today is a behavioral researcher at the Chengdu Research Base of Giant Panda Breeding, Sichuan Province, Peoples Republic of China.

James was born just outside of Queens, New York City. His father, José Ayala Román, was originally from La Perla and his mother, Lourdes González Más, was a “Nuyorican” from the Bronx. Growing up in Jamaica Queens, James’ heart was divided between his two loves: science and music. “I would beg my parents to bring me to the Bronx Zoo, the NY Aquarium or the Museum of Natural History, so naturally I excelled at biology in grade school. However, I also had a deep love for music. In middle school, I began playing the saxophone and attending a special public high school music program to perform jazz.” By high school, James had put his interests in biology aside.

James attended Purchase College, part of the SUNY system, as a jazz performance major. “Jazz is one of the purest art forms, the freedom and expression of improvisation is without parallel. As a child, my father schooled me on the legends: Coltrane, Parker, Davis, Monk, Gillespie, Rollins, and Mingus. These were lessons I never forgot.” 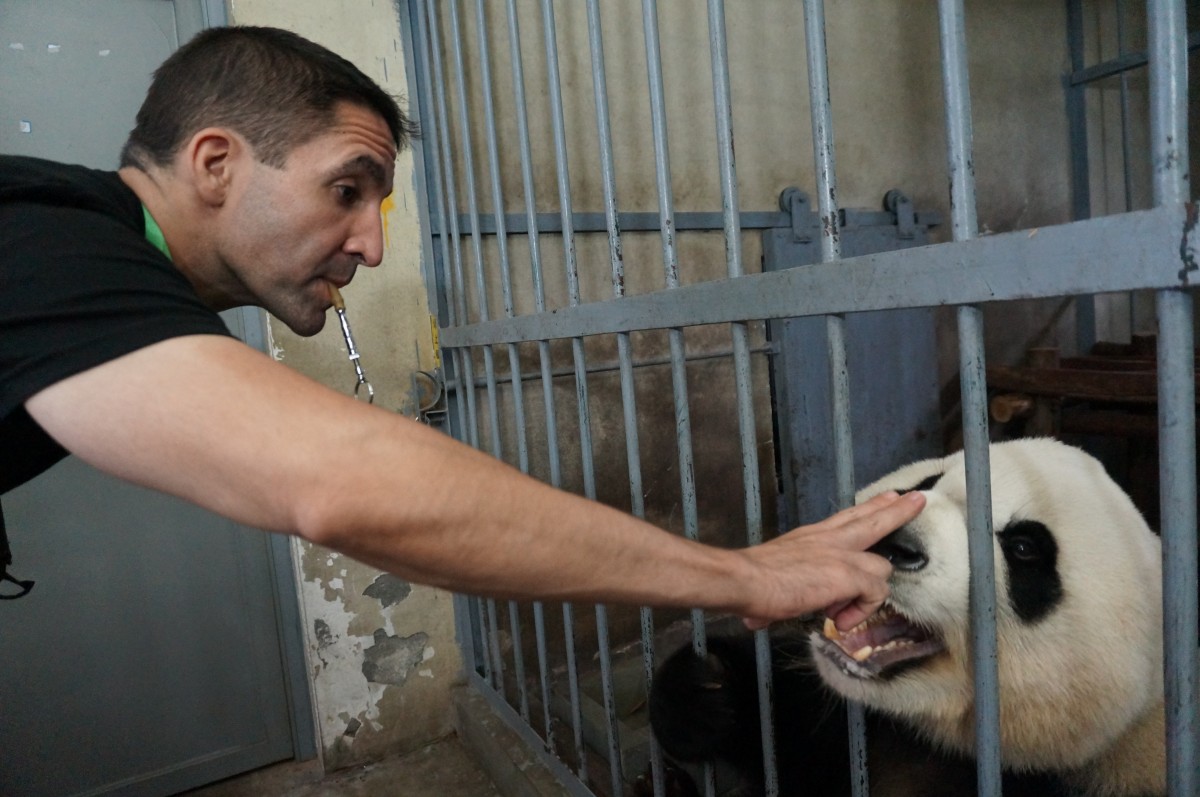 With an undergraduate degree in Fine Arts (music) and already registered to begin graduate school in ethnomusicology, James’ professional career in music was well on its way. However, a unique trip rekindled his interest for biology. “I traveled to Hawaii with a girlfriend. Off the Kona coast of Hawaii, I saw spinner dolphins feeding. This affected me deeply for some unexplainable reason and put me on my current path.”

The new path started with a volunteer job at the NYC Aquarium, then with a full time position as a zookeeper at Central Park Zoo, which lasted four years. “As a zookeeper, I was responsible for the daily care of a variety of animals from leaf-cutter ants, to penguins and from sea lions to monkeys. Two highlights of my experience at the Zoo were hand-raising 13 penguin chicks and starting a free contact training program with colobus monkeys.”

Eventually, James decided that he wanted a more active role in wildlife conservation, so he started a master’s program in conservation biology at Antioch New England Graduate School in New Hampshire. “It was then that I became interested in applying animal behavior to conservation research, so I attended CUNY’s Hunter College for a semester to study animal behavior.”

In 2004, as part of James’ graduate program, he visited Puerto Rico to work under the supervision of Dr. Melissa Gerald at the University of Puerto Rico’s Cayo Santiago Caribbean Primate Research Center. His job was to collect focal behavioral data and digital images for studies on male primate secondary sexual coloration. “Dr. Gerald, at the time, was at the forefront of the study of sexual coloration in primates. Under her wing, I gained more experience with animal behavior and was challenged like never before.” 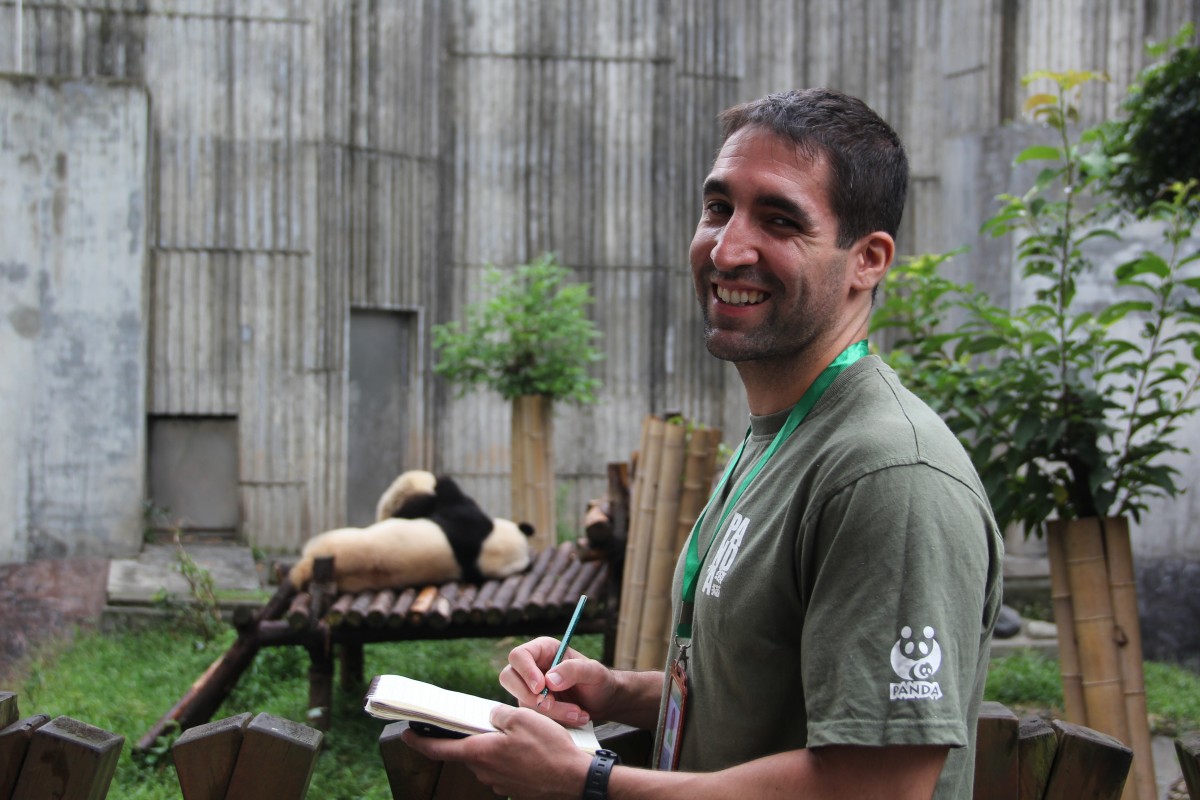 Following this position, James continued working at Cayo Santiago, this time as the Colony Manager. “This was a particularly challenging position. I was responsible for supervising all of the daily management of the island and the care of over a thousand free-ranging rhesus macaques and, when possible, collaborate on research projects.”

In 2010, James took a position in Sichuan, China, as a manager at an animal sanctuary that rehabilitated bears that were rescued from the bear bile industry. (In China, bear bile is used in traditional Chinese medicine; bears are kept in tiny cages and their bile is extracted daily with needles, tubes or catheters implanted through the abdomen into the gallbladder. Even more painful and infection-prone methods are often used).

“This position had its own unique challenges: first, was getting around the language barrier, mandarin is a very difficult language to communicate in; and second, many of the bears at the center were in poor health and disabled after years of being victims of the bear bile industry, as a result they required daily medications and special care.”

After working for a little over a year with black bears, an “opportunity of a lifetime” came up: working with the most famous of the endangered species, the giant panda. James is currently a researcher and animal trainer at the Chengdu Research Base of Giant Panda Breeding in Sichuan China. “I conduct behavioral studies on giant pandas and their distant relative, the red panda. As an animal trainer, I train both species to voluntarily cooperate with veterinary procedures so that we can study the internal status of individual animals stress-free. We then can then combine the panda’s medical data with the behavioral data and have a clearer understanding of the interplay between behavior and internal states of individual animals.” 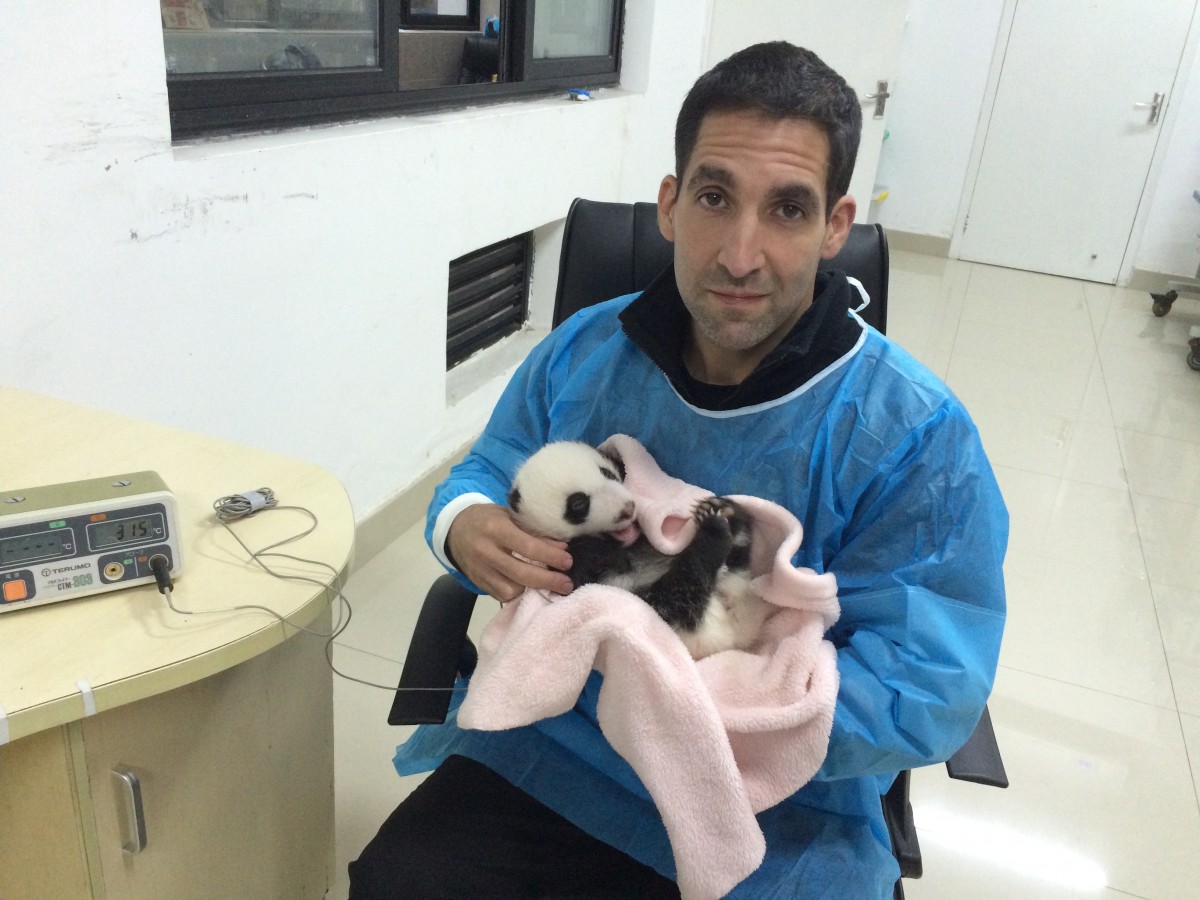 James with a panda cub. Photo courtesy of James Ayala.

James’ most recent research project is investigating seasonal changes in cortisol levels, sex ratios and breeding success in captive red pandas. “The Chengdu Research Base of Giant Panda Breeding, where I have worked for the last three years, has the largest collection of red pandas, as well as giant pandas, in the world.  For this project I trained several red pandas to allow my colleagues and me to perform abdominal ultrasounds on them. In addition, I was also able to come up with a method to collect blood voluntarily from a red panda. This was something few, if any researchers, have been able to do. Collecting blood voluntarily is an important step because it allows researchers to understand an animal’s blood chemistry and hormonal state without the need and confounding effects of anesthesia.”

When asked about advice to school and college students interested in science, James reflected on thinking globally and search for international educational experiences. “The best advice that I can give to someone interested in science is to study abroad as soon as possible. There are so many advantages of going abroad. First, by studying overseas you will see how researchers around the world use different approaches to face similar challenges, broadening your views and experiences. Second, overseas study and participating in international programs looks awesome on resumés and university applications. Third, and most important, is to experience the great and beautiful places of the world and the species that inhabit them, many of which are disappearing at an alarming rate. See them while you can, and hopefully you’ll be inspired to protect them.” 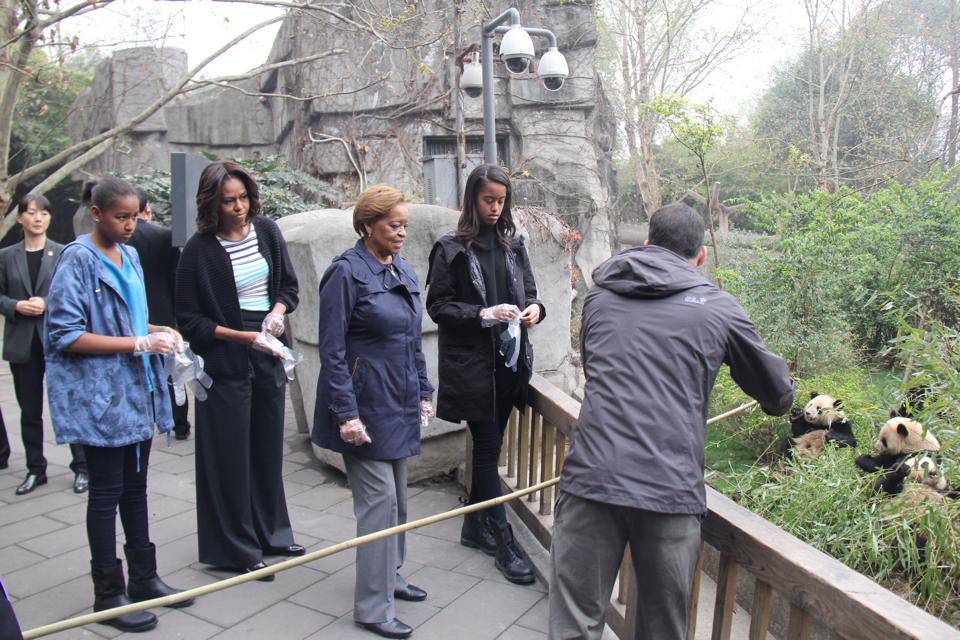 James Ayala describes his scientific work with pandas to First Lady Michelle Obama, her daughters, and her mother.

WHAT IS COVID-19 AND WHY HAS IT RECEIVED SO MUCH ATTENTION?
END_OF_DOCUMENT_TOKEN_TO_BE_REPLACED